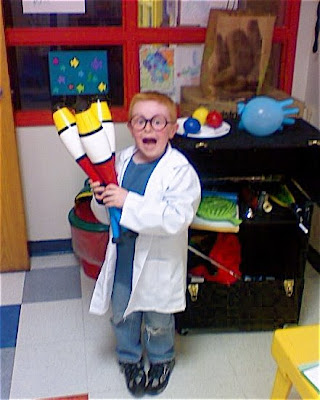 He has gone with me on my clown rounds at Jersey Shore University Medical Center before, but only to play in the playroom.

Yesterday was his first official visit as a full-fledged clown doctor!

He did a great job blowing up gloves, spinning plates, handing me props, assisting with magic tricks and performing a comedy eye-test routine (based on the structure of Who's On First) that he wrote.

He's so proud of it in fact that he finished the bit by telling everyone "That's mine! I wrote that one!"

Great to see Doctor Shane and congrats on that new routine he wrote! How fun you guys got to make Rounds together! My guys have been making Rounds with me since 1997, and we have shared some great adventures.