I apologize for the lighter-than-usual posting this weekend but there was a lot going on around here. Once a month or so we plan a "Secret Fun Day" where Shane has no idea where we are going or what we are doing.

It's secret mostly because if we told him where we were going he's drive us nuts with a million questions about it... 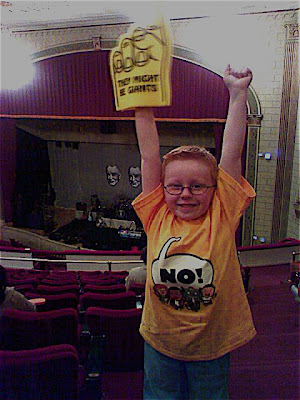 Sunday we took Shane to his first rock concert, They Might Be Giants (who now do family-friendly afternoon shows in support of their recent children's albums) at Town Hall in NYC.

The show was amazing and TMBG, in Shane's words, "totally rocked the house". 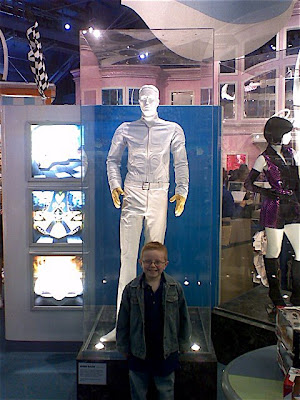 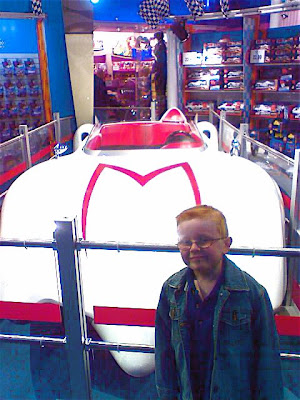 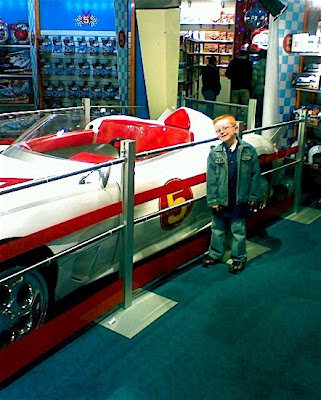 Afterwards we went to Mars 2112 where we rocketed to Mars for lunch. When we returened to New York we visited the massive Toys R Us in Times Square. Shane has been to the store before and to see Batman's Batman Begins costume, Superman's Superman Returns costume and various Spidey suits but nothing prepared him for the chance to see Speed Racer's Mach 5.

To see what all the excitement is about, watch the the trailer for the new Speed Racer movie by clicking here.

For 40 year old cartoon, Speed Racer is a pretty big deal right now, almost as big as Power Rangers, but he'll have a lot of competition as first Iron Man, then the Hulk and finally Batman all have their movies released this summer.

It's a good time to be a five year old boy.

Despite the Pope's visit we didn't hit any delays and as we passed through Hoboken on our drive home I caught him resting his eyes in the back seat. "Are you getting tired, Buddy?" "No", replied quite matter-of-factly, "I just have a little bit of sleep glue in my eyes."

Today's posts will be delayed until this afternoon as Shane and I are going to spend the first day of his Spring Break at the movies seeing Horton Hears a Who.

Just wondering, but will that Sleep Glue hold on a clown nose? Might have a gold mine, there, Pat.

Shane,
You lucky fellow.
It is a good time to be a kid!
Tommy

Strange how it takes a non-clowning related post (but then again - family is an aspect of clowning, or is it vice-versa?) to get me to type my first comment, but NICE! TMBG as a first concert? Well played, Mr. Cashin! I also have the same shirt and a foam finger I scored at an NYE gig in Brooklyn in 2005. And I agree and believe that Shane (and you ) is (are) quite justified in his (your) excitement about the upcoming Speed Racer movie.

It's also a good time to still be in touch with the little boy inside oneself.

This isn't a comment, but rather a personal note to you. It has to do with the picture "Lonesome" that I informed you was for sale at the Trigg ison Gallery in L.A. (It was erroneously identified as Emmett Kelly but was, of course, Otto Griebling.)

The woman who owns the painting (Gerldine Clark, widow of actor Dane Clark - who was once married to the "Lonesome" artist Veres) has sent me a rather bristling letter. Here's what she has to say:

For your information and your friend Pat Cashin. The painting entitled "Lonesome" is no longer at the Trigg Ison Gallery it is in my home and in my possession and has been for many months. You are requested to inform your friend Pat Cashin at "Clown Alley" to remove the picture of this painting and the false information on his Web Site immediately. This painting is not for sale and is hanging on the wall in my house and is no longer on the Web Site of the Trigg Ison Gallery. I would appreciate that you do this as soon as possible . I am sure that your friend Pat Cashin does not want to have any false or misleading information, or be a party to anything that is untruthful,.Please inform him post haste.

So there you go. I'm sure a veteran blogger like yourself will know what to do. She hasn't threatened legal action yet, but I can sure see it from here!