Happy Birthday to the King of Rock and Roll himself, Mr. Elvis Aaron Presley.

Last night Shane and I went to the Tinton Falls Public Library, a small building on Broad St., to pick up some new books and to find out more about the local Cub Scout pack.

As we walked through the door we noticed a tall, skinny man in his 40s at the computers. He looked like Tom Cavanagh (former star of NBC's former show Ed) sporting a wildly over-sized pompadour, sideburns and the gaudy white jumpsuit/belt/boots/cape combo of the Vegas-era Elvis. 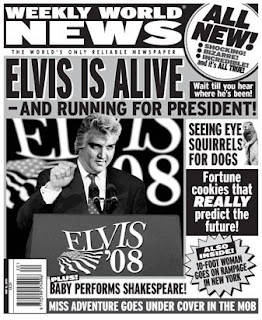 I thought it must be a library employee dressed up for some kind of Elvis' birthday celebration so I pointed him out to Shane and said "Omigosh! Hey Buddy, it's the King! Shane, what does Elvis say?" to which Shane replied loudly "Wuhhhh, thank you. Ahhhh... thank you vera much-a!"

The guy never looked up from the computer; never acknowledged that we were there.

I would have liked to get a picture of the two of them together, but I could see that "the King" was clearly too busy to hold court, so we didn't ask.

Shane and I walked back to the children's section where several of the Cub Scout's moms were huddled together talking about "Elvis". Apparently he's not an employee. He's not an impersonator. He's local eccentric and he does this all the time. We just happened to see him on the night before Elvis' birthday.
We picked out some books, left the library and then stopped for dinner at McDonald's where Shane told me, "We probably should have asked Elvis for his autograph. He's really famous but he's kinda rude."

Shane didn't think of this guy as some local nut at all. He thinks that we met the actual honest-to-goodness Elvis at the library.

Of course Elvis is still alive!

Of course Elvis dresses in his stage gear like that all the time!

And if he needs to get a little work done on the computer, what better place than the lobby of the Tinton Falls Public Library to do it?

Shane is convinced that he really met Elvis last night, which is, by far, a way better story and much cooler thing to go through childhood believing than any plain old, simple uninteresting truth.
So I'm sure that Shane is sitting in his kindergarten class right now telling his teacher that he saw Elvis Aaron Presley, the world-renowned King of Rock & Roll, last night using the computers at the Tinton Falls Public Library, and sounding as crazy to her as a stack of Weekly World News cover articles.

Oh, and that he's actually kind of rude in person.

hmm,maybe he was looking at something dirty??? and btw I don't like rude people either what has this world come too that's why we need the circus and clowns