Photos courtesy of the collection of Mr. Edumund O'Neill

These backstage snapshots were in color, but the colors have so badly faded over the years that I have reproduced them here in black & white. The date on the back says "week of September 9, 1957" but that is the date that the photos were processed, not taken.

They look to be photos of Ringling at Madison Square Garden. I'm guessing the Garden because I have another backstage photo of Otto Griebling where the hallway walls have the same two tone paint scheme.

Another clue is that in one photo, Otto is standing in front of something that reads "Ringling Bros. and Barnum & Bailey" but that isn't proof positive. It doesn't look to me like a parade float and could be something created by Shriners and/or Circus Fans.

In fact, Otto, Felix, Jojo Lewis, Paul Jerome and Gene Lewis could just have easily been photographed together on a indoor winter Shrine date and these pictures could be from Detroit.
Does anyone have see any clues that confirm that this is the Garden and give some idea of the date? 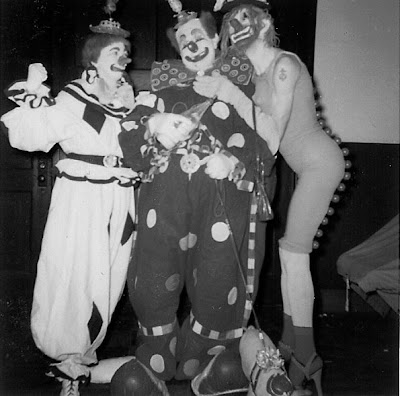 OK, Amelia is in there, which dates this picture post-1948. Amelia didn't perform for
the first few years of their marriage, so we can guess that this dates the photo as post-1950. 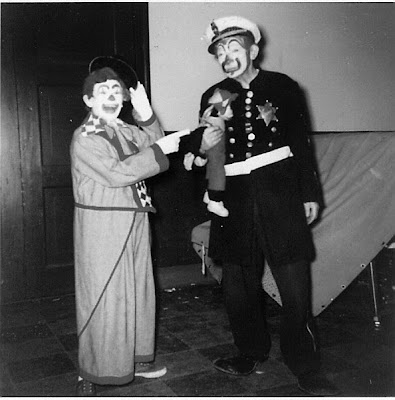 Unknown clown on the left, Jojo Lewis on the right

Jojo Lewis had left the Ringling show long before 1950 so this photo of a very
old Jojo reinforces the idea that these could have been taken at a Shrine date.

But Ringling was known to bolster it's alley for the New York run,
which could also prove that these are from the Garden 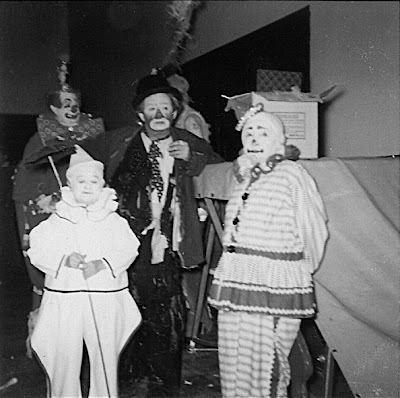 Felix Adler and Gene Lewis in the background, Otto Griebling
in the middle and I'm not sure of the identities of the two whitefaces in front

Again, back in the days before the Shrine clowns began working the show for free it was not uncommon
to have pros like Otto, Felix and Gene Lewis working dates like these together 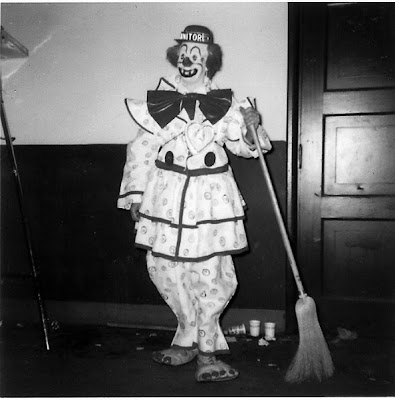 Paul Jerome drives me crazy. he has two very distinct makeups and there doesn't seem to be any rhyme or reason to when or where he decides to wear one or the other. It makes it just about impossible to date photos of him but I do think that he too had left the Ringling show by 1957. 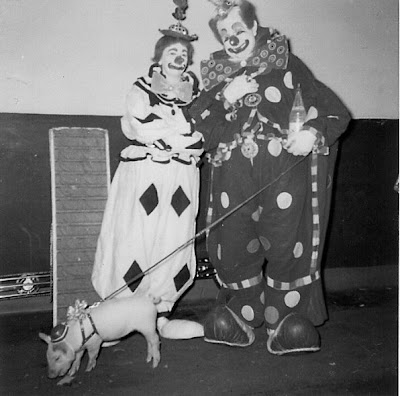 Again, Amelia in makeup, Felix's weight, the eyebrows of his makeup
and those shoes all date this firmly as being taken in the 1950s 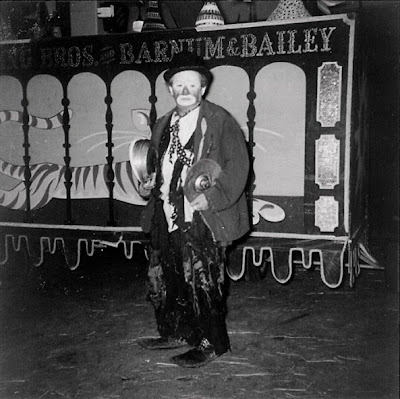 What is that thing behind him???

I think Gene Lewis was the RuPaul of the alley. Justaguess.

Those outfits are hilarious and he would have been the HIT of the Mermaid Parade in Coney Island that is held every spring.

The Mermaid Parade (and the Halloween Parade in The Village) is akin to experiencing Cirque du Soleil on Hill Billy moonshine.

Heya Pat!
Could the two whitefaces be Paul Horumpo and one of the Hanlons (Fred?)?

The whiteface midget is Paul Horumpo. Jerome, like you say, changed back & forth quite abit in the tramp/whiteface looks. This is from the mid to late 50's. He did leave the show by 1957, and I beleive he died around 1959.

Hi Pat,
This particular photo of Otto is from 1957. The float behind him was not as chintzy as one might expect from its size.
This float was in the center ring during spec. The sides and ends folded down to the ground and low and behold there was a beautiful multi colored rising castle.
This was the last spec that was designed by Miles White. For the Garden date the floats were very similar to the glory years. After the Garden most of the floats were cut down and put on smaller bodies so that they would fit in the semi trailers that Ringling was now using.
Dom Yodice