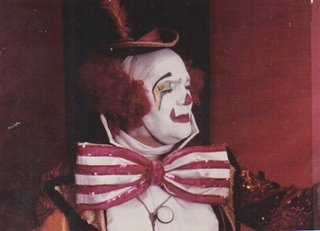 Billy McCabe, who I recently discovered was the Boss Clown/Producing Clown on the Cristiani show in 1960 (which contradicts the career timeline that he gives in his infamous interview tape) seen here possibly during his time on the Beatty-Cole show but more likely during his years on Circus Vargas.
Posted by Pat Cashin at 10/17/2006 08:19:00 AM

This picture of Billy was most likely 1987 on the Vargas show, and the wardrobe was designed and made by Wynn Morton of Dallas Tx. Billy looked wonderful in this Spec costume.

Send me an email at:

I'd love to talk to you!

Send me an email too!