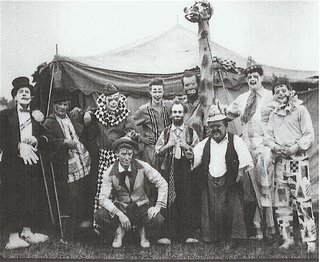 While this Alley may contain a plethora of future of past circus celebrities I don't recognize any of them in the makeups shown here. If it's 1959 then Billy McCabe, featured on Tuesday in his classic Harry Dann-inspired makeup, may be in this crowd somewhere as he was their 1960 Boss Clown/Producing Clown.

It looks like Jimmy Douglass second from the right. I had the pleasure of working for Jimmy on the Gracie McIntosh Rochester NY Shrine date in 1980. Also on that date were: Rick Legg, Buck Nolan, Eggroll, Vern, Elmo, Middy Streeter, Bobby Davis.
The folks from KODAK would hang around the alley all week testing new cameras and new film; at the end of the week we all received a huge photo of the clowns in the alley. The guys from KODAK were very easy to work with.

LOL Mike ya beat me to it! I agree Jimmy Douglas.. It also looks very similar to Kenny Dodd next to Jimmy, need to drop the bottom lashes, But I don't know if he was already with the beatty show. Bill Brickle also got his start clowning on the christiani shows but don;t think he's in this photo. I think the heavy little guys name was Bagungi?

Hey Bernie!! Help with this one!

Willer Nicolidi used to refer to all little people as "bagungi's".

Kneeling in front is Jimmy Douglas' partner at the time, I remember him only as "Red". I believe the Vern you mentioned from Rachester was a later partner of Jimmy's.

It's not easy to mis-spell a word when you are looking right at it.

Well, Mr Lee, you've hit the stake on the head. Note that Kenny Dodd got his start in Clowning under the tutorage of Billy McCabe on the show and also does anyone know that Kenny was once a solo trap artist? Yep, that's how he started his career in the biz...
Glad to assist.
Bernie...

Forgot one clown. The little guy in the middle next to Bagungi is none other then Dody Daniels of Beatty Cole fame. He is the tramp clown in the center.