Gordon, to my knowledge, is the first man I can find record of being an African American "clown", calling himself as such, who wasn't just a white man in blackface like Eph Horn.
In 1904, he was booked as a clown and pantomime artist at the St Louis World's Fair, promoting their top money-making exhibit: Beautiful Jim Key - The Educated Horse.  The horse was formerly owned by P.T. Barnum himself, and was purchased and raised by slave-born African American veterinarian Dr. William Key.  The horse could spell with letter cards, do math, and make change from a cash register.  According to a November 1904 St. Louis Republic newspaper article about clown acts at the World's Fair, "Gordon Bunch, whose pantomimic feats in front of Jim Key, and his excellent makeup as a clown, have been most attractive, is another old-timer in the profession, and his work during the summer has been remarkable at producing results at the box office".

If he was an old-timer in the profession in 1904, I wonder how far back his career went?  More research!

After the World's Fair, Bunch accompanied the horse on a midwestern tour, reaching Minneapolis on March 30, 1906, along with veterinarian Stanley Davis and groom Sam Davis.


Not long after, Bunch performed at Luna Park in Cleveland Ohio.  A reviewer called him "one of the good clowns."  He also took his clowning to the vaudeville circuit.  I found the following account of an adventure he had one night, posted in the book "Blacks in Blackface: A Source Book on Musical Shows" :


Indianapolis Freeman
April 9, 1910
Gordon Bunch-To the Rescue-Saves Life of White Woman-Gets in Bad
Recently while playing a vaudeville house in a small town Gordon Bunch, America's only colored ragtime clown and versatile comedian, met with an accident that goes as follows, from his own pen:
"While doing my clown act in a vaudeville house in a small town where they don't like colored people to stop overnight, the theatre caught on fire.  Every-body got out safely except one young white lady, who was left behind.  Although I was in my make-up, I rushed back into the burning building and brought the young lady, who was half dead to safety in a few minutes.  She came to herself, then asked to kiss the man who saved her.  I was standing among the crowd, removing the make-up from my face the best I could, when she came to where I was standing.  She looked at me and then cried, 'It's a coon!' and fainted.  Afterwards I was held over for twenty-four hours for causing the young lady to faint.  However, I am faring exceedingly well and going big everywhere."

He was billed as "The Mysterious Komedo - The Mechanical Wonder" on the vaudeville stage.  I found record of this act in the November 20th 1916 issue of the Xenia Daily Gazette (Xenia, Ohio) under the COLORED SOCIETY column-

Hundreds of people were attracted to the windows of the Adair Furniture Company, Saturday evening, and marveled at the appearance of Mr. Gordon Bunch.  Mr. Bunch was made up as a mechanical figure or "dummy" in such a way that it was impossible to detect wether he was real or artificial.  On this coming Thursday evening, Mr. Bunch will present his big feature, "The Power of Man," at the opera house.

According to census records, he was listed as a "Ticket Taker" in Cleveland, Ohio in 1917.

Laughs for the Left Behind Variety Show April 8!

For those who do not know, Pat Cashin, the namesake and creator of this blog, passed away unexpectedly over six months ago.  His friends are putting together a comedy variety show dedicated to him on April 8 in New Jersey.  Here is the rundown:

Save the Date for something that will be very very special.
MotionFest and other friends present

Laughs for the Left Behind
A celebratory comedy show to benefit the family, friends and community Left Behind by the unexpected July passing of Patrick Cashin.

Laughs for the Left Behind logo stickers to be worn on your left buttock will be available on site.

Plus more soon to be released

Please note that all performers listed are scheduled to perform, but this lineup is subject to change. 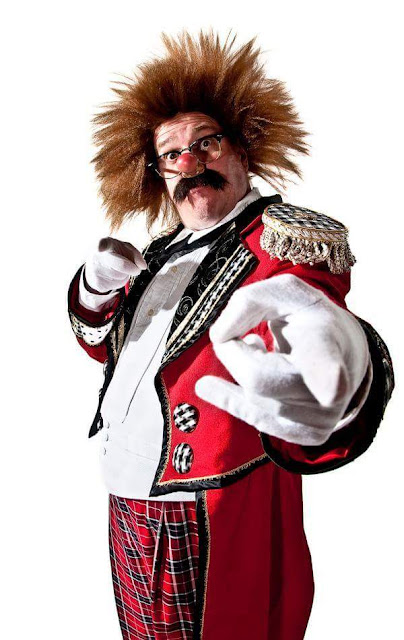