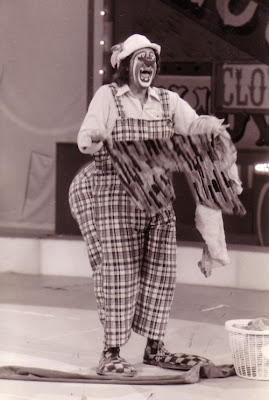 Other than the fact that he was a very early Clown College graduate, and that he was keenly interested in combining Felix Adler's (more accurately Paul Jerome's) "teeth" makeup and padded rear end with an auguste makeup, I know very little about Garden Bros. longtime clown "Rumpy".

I can't imagine walking into Bill Ballantine's office and telling him that you'd like to be referred to as "Rumpy"...

"Rumpy"?!? Are you ABSOLUTELY sure that you wanna go with "Rumpy"?

I do have a tape of the 'ol Rumpster performing an absolutely KILLER pie gag that I have to post one of these days...

CLOWNALLEY.NET: Our One Year Anniversary! 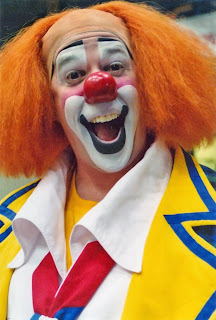 This week CLOWNALLEY.NET celebrated our one year anniversary!

To date we've had 824 individual posts, I've posted 70 of my clown videos (since January!) with dozens more found on YouTube, and as much information as I could find on each photo and video.

I'd like to thank all of those who have sent (and continue to send) in photos and info and hope that you've all enjoyed the last year as much as I have.

We've got some big announcements next week, some great video clips in the hopper and an update on the Slivers Oakley project tomorrow but first, Steve Copeland reminds us of what American circus clowning used to look like before it became all whistles, bicycle horns and volunteers sitting in chairs...

The sink gag with Ryan Combs and Steve Copeland from the 134th edition in Memphis, TN 2005.

"This version was filmed in Memphis, TN (Larry, if you are reading this you can see you and your family watching on the ring curb....don't look so bored!) in 2005.

The sink gag was not in the Adventure at the start of the tour, but Ryan had been talking with Greg DeSanto about the gag and we started writing it in Trenton, NJ, mapping it out with some very crude props. We even had a scout family that had arrived for a PR early to give us our first audience feedback (not sure what their initial reaction was to see two twenty year olds out of make-up and in clown boxers hitting each other and throwing mop heads around).

In Fresno, CA Ryan built the sink and in each town after that we got the props needed.

Our big debut came in San Jose, CA. We showed the gag and got the best reaction the gag had ever gotten. People were screaming with laughter all the way through, and they were about to piss themselves during the blow off.

Needless to say, we were on Cloud 9 that show and couldn't wait to put it in the regular rotation the next week in San Francisco, CA.

Little did we know it was a bad thing to open with the gag so strong....San Francisco is not known for having the best audiences, and we got next to nothing from them when we started doing the sink gag regularly there.

We couldn't figure it out. In other cities as well we didn't reach the same level of hysteria in our audiences that we had reached that first night.

Finally in Memphis, over a year later, Ryan and I decided to come in early on Sunday morning and rework the gag. We cut some bits, moved others around, worked on the flow, etc.

We struck GOLD! We got a very good reaction (especially for a Sunday afternoon show), and after that the gag got stronger and stronger and we knocked 'em dead every time we performed the gag! (Except for one time we foolishly did the gag for a morning show....NEVER AGAIN! Nothing is funny before noon....right Mr. DeSanto?)

Despite all the headaches of the gag (setting all the props, getting the water ready, cleaning the water up off the floor, dealing with management about water that shot up on the rigging, etc.), the response we got from the audience made it all worthwhile.

So just imagine it as it was at the end of the tour with all the timing down perfect and every bit milked to its fullest potential.....

and that will have to tide you over until I can work with Ryan again and revive the gag! Until then, enjoy!"

"It would be safe to say that this gag was the highlight of my Ringling career. I always had fun doing it and it got some great reactions from the audience. By the end of the tour you knew when the big laughs were coming, and that was cool!

It's too bad the clowns aren't allowed to write the gags for the show anymore. This video should be proof that an Alley of clowns under the superb guidance of good clown directors (such as Greg and Karen DeSanto) can come up with something wonderful."

WILLIAM SHAKESPEARE: The Comedy of Errors

Almost 20:00 of PBS's very rarely seen Live from Lincoln Center 1987 broadcast of William Shakespeare's THE COMEDY OF ERRORS from the Vivian Beaumont Theater featuring the circus skills and "New Vaudeville" talents of The Flying Karamazov Brothers, Avner the Eccentric and Jeff Raz...

MARK ANTHONY: At the International Clown Hall of Fame in Delavan, Wisconsin

Some highlights from Mark's visit to the ICHOF back when it was in Delavan. He talks about some of his props, Professor Paul Wenzel and how he came to add the dog collar to his costume and the wagging tongue to his makeup.

I wish I'd had the chance to meet him.

Ringling Bros. and Barnum & Bailey lost quite a bit the day Mark Anthony packed up his trunk and walked out the back door. Had people like he and Mike Coco stayed I think things would have been very different in the 80s and 90s. 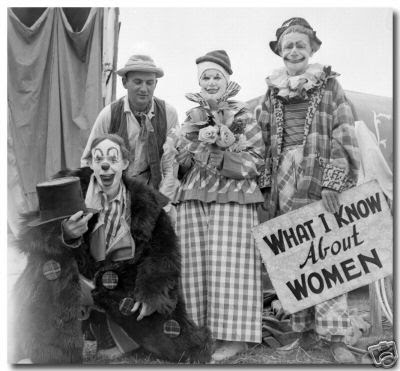 I'm not sure about the fellow out of makeup but it looks like we have (from the left) Hal "Tearini" Haviland (sometimes spelled "Havilan"), Lil and Gil Wilson together on the Hunt Bros. Circus, year unknown.

Click the title of this post to be taken to the eBay auction where this and other vintage Hunt Bros. photos can be found. 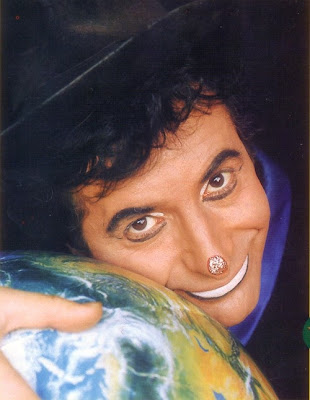 "Here is a picture of Francesco from 1994 when we did a Winter date with him in Holland. A very humble, and friendly gentleman, & a pleasure to be around. I do hope he has recovered from his health problems and has returned to the Big Apple"

I have never had the pleasure of meeting him. It seems like it certainly has been a long time since I've heard anything about Francesco's recuperation. I hope he's doing well and is back to work by this point. His son does a marvelous job but we'd all like to see the real deal again.

Don Covington, is there any news?