Video courtesy of the ICHOF archives.

Scott started his clowning career in Canada and later was in charge of Vidbel during the 1990s and into the early 2000s.

He worked on Ringling as boss clown and then as a talent scout alongside Tim Holst. He also worked in a managerial position on Big Apple Circus. Currently he is the Executive Director of Circus World Museum in Baraboo, WI.

Mike Snider graduated from Ringling Clown College in 1978, and after a short time on Ringling's blue unit, he went to Clyde Beatty Cole Bros' Clown Alley where he spent many seasons. He worked on many other shows, notably the Cole All Star Circus and Vidbel. He was a frequent partner of Billy Vaughn. Mike currently works in the medical field in Arkansas.

John "Eggroll" Kane began his career as a fire eater on Clyde Beatty Cole Bros Circus in 1979, and the next year became a member of Clown Alley. Eggroll performed as a clown and ringmaster on many shows, and just a few years ago he was ringmaster of the Big Apple Circus for several seasons.

Now he occasionally performs his one man show, My Life In The Basement, around the Buffalo, NY area. 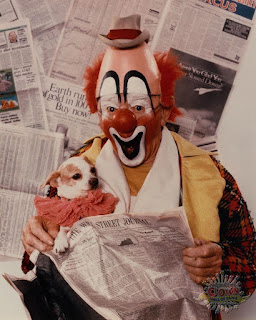 I've always enjoyed their work, but have never been able to find much information about them. This morning I found a documentary about them entitled Le Double Et Son Clowns about their experience with Cirque, and featuring them training three clowns to replace them in the show.

I'm guessing one of the new clowns might be Eric "Royo" Sanchez, whom I worked with on Ringling in 2007. I know he replaced the red clown on the Quidam tour.

I know what I'll be watching tonight!

Annie Fratellini and Les Bario perform with French actor/singer/songwriter Franck Fernadel on his television special Tel Is Franck in 1967.
Posted by Steve Copeland at 9/30/2020 08:24:00 AM No comments: 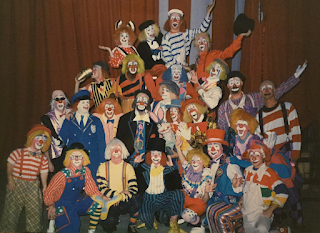 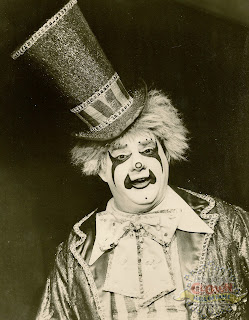 Jimmy Douglass, long time producing clown for many mud shows and Shrine dates.
I would love to hear more about Jimmy's gags. Elmo Gibb told me about the Jimmy Douglas produced firehouse, which sounded pretty funny. The firemen would be looking for the hose, and they would finally take an axe to the stomach of a fat fireman and pull the hose out like it was his intestines.
Big time comedy!
Posted by Steve Copeland at 9/28/2020 08:03:00 AM No comments:

Fumagalli, Darius, and Alberto Caroli performing the Haunted House entrée in Phénoménal, the 2013/2014 season of Cirque D'Hiver Bouglione in Paris, France.
Posted by Steve Copeland at 9/27/2020 09:14:00 AM No comments: