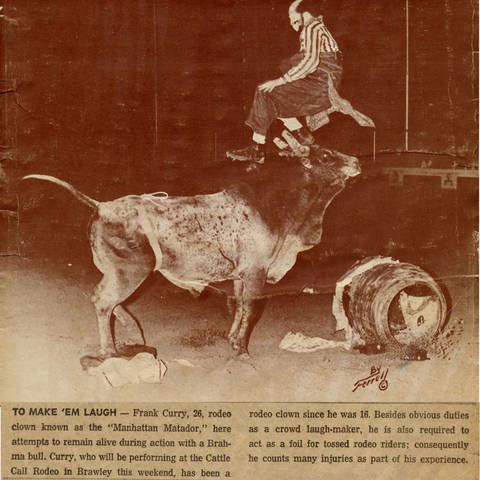 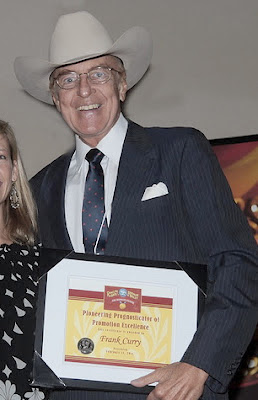 Deeply saddened to learn of the passing of my friend, Frank Curry.

Men like Frank are all too rare and his generous spirit will be very sorely missed.

THE FRATELLINIS and GROCK (Newsreel footage) 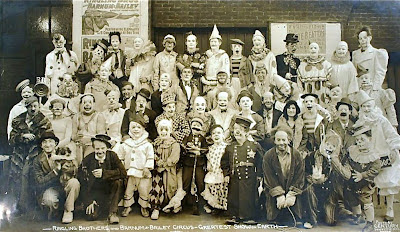 American clowning reached its zenith in the 1950’s. Reliable records indicate that there were over five-thousand professional circus clowns working in North America. Besides Ringling Brothers, Barnum & Bailey Circus, there were dozens of independent tented circuses, called ‘mud shows’, that traveled by truck throughout the United States and Canada. The interstate highway system was a godsend to them, allowing them to travel quickly from town to town without worrying about muddy, impassable back roads. And there were several dozen showmen who put together Shrine circuses; these shows used only premium acts and paid very well. A clown who got on with a Shrine circus outfit could work seven months of the year and then spend the rest of his time fishing down in Florida or augmenting his income with work on one of the year-long mud shows. If you knew your funny business, it was a good career with steady work and pay. And recognition. President Harry Truman started the tradition of inviting a notable circus clown to come to the annual White House Easter Egg Hunt, as a treat for the children. The fortunate funster who was chosen usually made the front page of the New York Times, as well as the cover of LIFE magazine.

All of these circuses were determined to have the largest clown alley around. Ringling Brothers kept that record for many years, boasting on their posters that their clown alley contained “A Congress of One Hundred Clowns!” But several of the more ambitious Shrine circuses were determined to top Ringling’s haughty boast. In 1953 the Hanneford Shrine Circus put on a show that featured, according to their publicity posters, “An unparalleled collection of two-hundred leaping, laughing circus clowns!” The word around circus lots was that Hanneford had simply grabbed all its roustabouts – the working men who put up and tore down the rigging for the show – and slapped makeup on them, then marched them out into the ring with the regular professional clowns. However it was done, it proved to be a ticket-selling coup for Hanneford; they played to straw houses until the end of the season in September. (A ‘straw house’ is circus jargon for a full house – back in the old days when seating ran out, the show would provide bales of straw for the surplus audience to sit on.)

This was a time before anyone had any reason to fear clowns – no Stephen King stories or clown serial killers – and so the whole family could enjoy the slapstick antics of these wonderful performers in their baggy clothes and exaggerated makeups. Insurance companies, ever mindful of potential markets for their policies, commissioned a study in 1956 to find out how prudent it would be to offer life insurance and annuities to circus clowns. Their actuaries interviewed hundreds of professional clowns and came close to developing diabetes from eating so much cotton candy while watching circus performances. The consensus was that circus clowns could prudently be offered life insurance or disability insurance, and the reports went on to list the top six ways that circus clowns usually died. This information is in the history library at the Circus World Museum, in Baraboo, Wisconsin. I’ve gone through the reports, and hereby give you THE TOP SIX CAUSES OF DEATH IN CIRCUS CLOWNS:

1) Jake leg This was circus jargon for white lead poisoning. Up until the late 1920’s or early 1930’s circus clowns whitened their faces with a compound of beeswax, mineral oil, and white lead. Since they wore their makeup for an average of 16 hours per day, the white lead had a chance to seep into the skin pores and make its way into the vital organs, including the brain. The most common symptom was a tremor while walking, and eventual paralysis of the legs. In many instances when the clown would stop using white lead the symptoms would clear up – but unfortunately the lead would not be flushed from the system and would catch up with the clown when he grew older, leading to migraines, confusion, and often premature death from irreversible liver damage. White lead has been outlawed for any kind of cosmetics since 1945.

2) Transportation accidents Clowns drove many of the circus trucks between towns for the mud shows. This was known as ‘cherry pie’ – doing more than one job on the show. Most performers did cherry pie; they drove, they sold popcorn, or helped with the set up and tear down. The tour schedule of a mud show was exhausting; they played just one day in a town, then packed up and drove to the next town, usually about a hundred miles away. So lack of sleep was a constant problem for everyone, including the clowns. Nodding off while behind the wheel of a large equipment or animal truck was an occupational hazard for clowns. Another source of transportation accidents was the circus train; it could be a bumpy ride, since railroad tracks had been neglected during World War Two and after, and an occasional unwary clown would be ejected from the vestibule of a speeding circus train when it rounded a corner or hit a rough patch of rails.

3) Septicemia Blood poisoning, in layman’s terms. This one lacks any concrete explanation, except for the fact that animal dung is everywhere in a circus, and when it gets into an open cut it can cause blood poisoning quite fast. But why clowns were more susceptible to blood poisoning than other circus workers remains a minor mystery.

4) Accidents during clown gags This one is a no-brainer, since the typical circus clown gag back in the 1950’s resembled a pitched battle more than anything else. There would be explosions, guns going off, punching, kicking, falling, and huge plumes of flame. Virtually all professional clowns who worked with a circus in the 1950’s, or earlier, had some black powder marks etched into their faces and hands.

5) Cirrhosis of the liver Okay, it seems like a unimaginative cliché; but clowns were notoriously heavy drinkers, and who can blame them for taking a couple of snorts after a hard day of dodging pies, being blown up, and stepping in elephant poo?

6) Hardening of the arteries A garden variety illness that was currently affecting 20 million other middle-aged, Caucasian males in America. Clowns were rather more mainstream than we give them credit for!

In the background there may be Art Cooksey and Bobby Kay. If someone could ID them for certain we'd have a better idea of when this footage was shot.