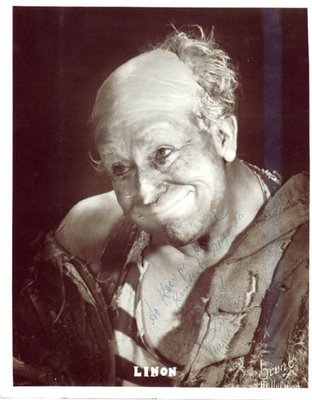 Linon, a very funny Belgian (or possibly French) lowwire walking clown who appeared several times on both Ed Sullivan and Hollywood Palace and is featured in the film JUMBO where he doubles for Jimmy Durante.
Posted by Pat Cashin at 6/24/2006 05:28:00 PM 3 comments: 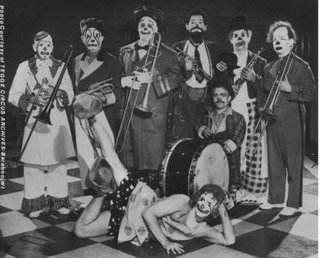 I don't recognize the drummer but it looks as though the showgirl on the floor is Dennis Stevens.

Bill Strong tells me that the clown between Bobo Barnett and Joe Vani is Lawrence Cross. Now I wonder if the whiteface on the far left isn't Bobo's wife who worked with him for a number of years before the birth of their daughter Bonnie Ann.

"Mr. Lee" tells us that the clown on the floor may be Dougie Washburn.

The picture was posed in Chicago (where Polack's head offices were located), at Medinah Temple. I found the right box and dug out my Polack programs for the Medinah shrine. The 1952 edition matches the most of the clowns you list. 7 are pictured and 8 names are given in a listing. The clown to the left should be Rusty Benson, who lived in central Illinois. The smaller person by process of elimination from the names, should be Tommy Roberts. The 1949, 1951, 1953 & 1954 do not match.— Ray Kadlec
Posted by Pat Cashin at 6/23/2006 12:05:00 AM 7 comments: 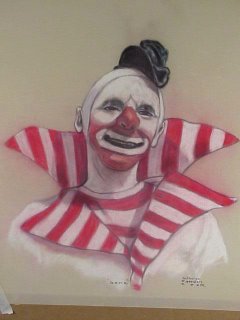 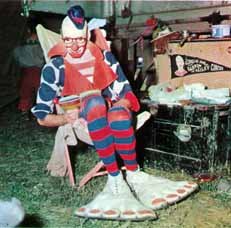 Gene Lewis, a fixture of the post-war Ringling alley. He performed on the show from 1952 - 1957, 1961 and from 1964 through 1968. This much I know: Gene was born in Bloomington, Indiana around 1900. He was in vaudeville, and his partner Frank Faylen later went on to work in many Hollywood films, including It's A Wonderful Life. He was often partnered with Albert White and in the mid 60s he did a very funny Twiggy parody walkaraound.

This from Rick Whelan:

"I've been enjoying your blog on the great old-time circus clowns.

I was wondering if you ever came across the name of an old friend of mine - Gene Lewis?

When I was boy and enamoured with the circus, Gene and I were pen pals and I still have his many letters which detail his life as a Ringling circus clown. I lost touch with him in the mid-1960s, but I believe he retired shortly after that and last I heard was living in a trailer park somewhere near Los Angeles.

I assume he is passed on by now, but I would appreciate hearing from anyone who has any additional information on his life. rickwhelan@sympatico.ca".
Posted by Pat Cashin at 6/22/2006 11:46:00 PM No comments: 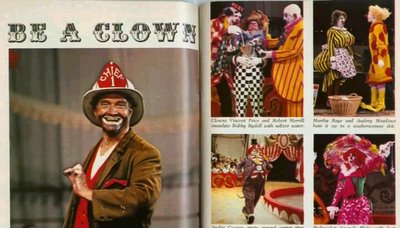 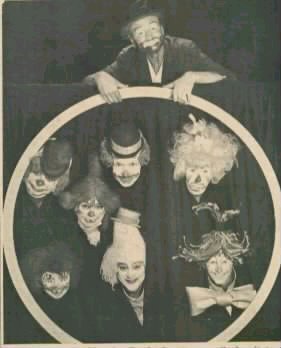 The above photos from TV Guide and the blurb below represent all I know about Red Skelton's CLOWN ALLEY, a special that aired November 11, 1966. It was described in Time magazine that week as...

Why CBS aired a special so obviously aimed at children at 10:00 PM is odd. Why Red cast Jackie Coogan (He had worked with Chaplin in THE KID as a small child but was much better know in 1966 as The Addams Family's Uncle Fester), Robert Merrill (who?), Vincent Price (?!?), Caesar Romero (who played the Joker on the Batman TV show), Amanda Blake (again, who?) and teen heartthrob Bobby Rydell is even odder.

I believe Time may have it wrong and it was Jackie GLEASON, not Jackie COOGAN who was in the special but I don't know as I've never seen it and can't locate a copy anywhere, not even from the Red Skelton estate who have no record of any surviving master tape.

Anyway, it might be interesting. It's a series of clown gags done by the above mentioned celebrities, co-written by Mort Greene (who wrote many of the "silent spots" on Red's show) all performed under the direction and supervision of "technical advisor" ICHOF inductee and Ringling Master Clown, Bobby Kay.

Then again, it could be an hour of material that resembles actual circus clown gags about as much as the last 7 minutes of JUMBO, which had Albert "Flo" White as a consultant. 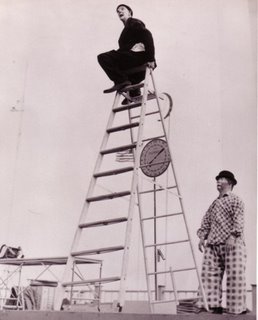 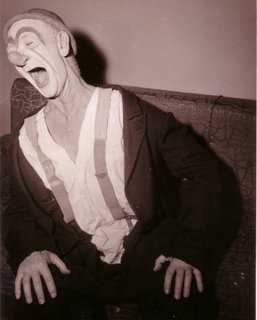 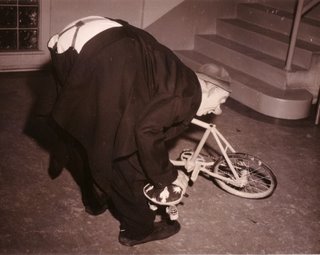 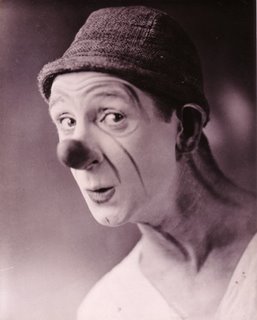 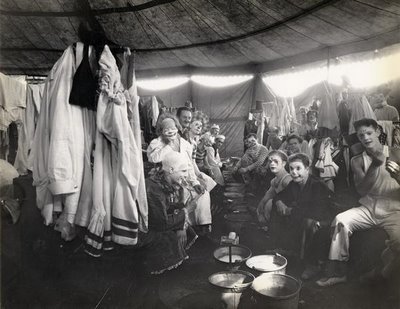 An often reprinted picture but a great one nonetheless, the Ringling Bros. and Barnum & Bailey Circus Clown Alley back in the "Golden Age". Pictured among the stars we see Jack Le Clair, Charlie Bell, Gijon Polidor, Felix Adler and Chesty Mortimer and Paul Wentzel poking their heads up in the back.

If you look between Chesty and Felix there are two men; one a whiteface, the other a man without makeup but wearing an auguste-fleshed bald top wig with yak hair out the sides. This may be Lou Jacobs but it's hard to tell as he's so far away from the camera.
Posted by Pat Cashin at 6/22/2006 11:22:00 AM No comments: 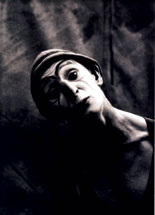 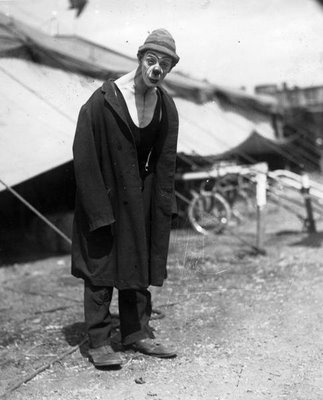 All I know about Bumpsy is what I've read. In addition to the material below I know that he was married to one of the Hanna triplets and that at some point in the late 60s he went down to Venice in the to speak to someone about the possibility of re-joining the Ringling show. When he found out what they were paying he turned on his heel and left. So much for the popular story that Irvin Feld had searched all across the country but couldn't find enough clowns left anywhere for his new second unit so he had to open Clown College. I guess then, like today, the pros would just prefer to work the Shrine circuit where they earn a lot more money and work a much less hectic schedule.

He is also mis-identified on page 37 of Charles Meyer's HOW TO BE A CLOWN as Levoie Hipps.

Bumpsy was one of a kind, he was on the Hamid Show for awhile. He and Dime did a surveyer gag where Dime would stand in the ring with a prop surveyer's transient, and Bumpsy would take a roll of toilet paper into the seats and have someone hold the end. Then Dime would direct him through the seats, and I'm sure you know where this is going. Once they had the whole section covered Dime and Bumpsy would just walk off the floor. I can see the building people allowing that now. 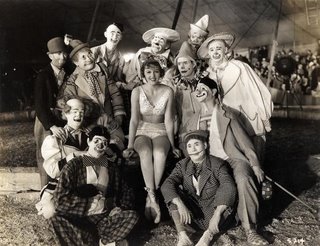 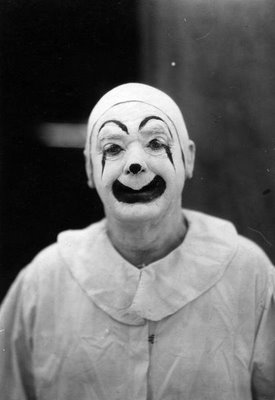 Display 5: "Children´s Number. Five Concurrent Exhibitions of many Cleverly Trained Animals. This was Spader Johnson in ring 1 with baby elephant "Mary", Capt. Wills with seals at stage 1, Misko with a horse and dog act in the middle ring, Charles White with pigmy goats at stage 2 and Harry Wentworth with educated pigs at ring 3.
Posted by Pat Cashin at 6/20/2006 11:35:00 AM No comments: 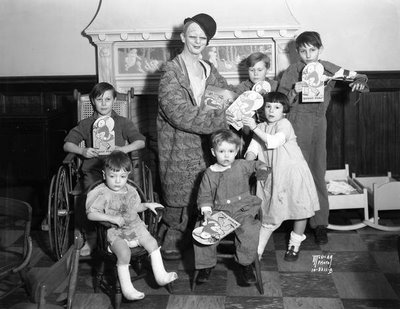 Longtime star clown of the NY Hippodrome and brief film star,"Toto" distributes cardboard Easter bunnies packed with lollipops from W.T. Grant Company. This event was held in the 2nd floor playroom at U W Children's Orthopedic hospital, 436 N. Randall Street March 18, 1932.
Posted by Pat Cashin at 6/20/2006 11:21:00 AM No comments: 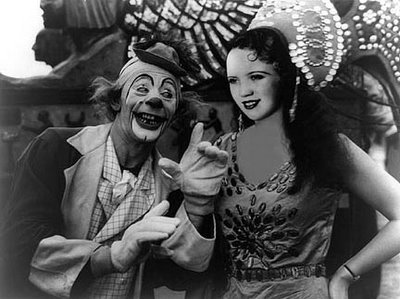 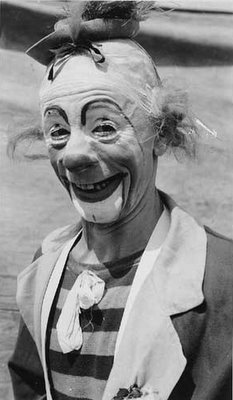 Possibly the greatest circus clown of the "Golden Age" that no one has ever heard of, Gijon Polidor. Like Bluch Landolf, finding information on Polidor is harder than licking your elbow.

For more on the Polidor story we turn to correspondent Robin Estes:

And forwards this info from Tim Tegge:

Apparently he worked in a very freelance style and mocked everything happening around him, including himself. He did the boxing gag with Lou Jacobs, Billy DeNeero and a tumbler, Charles Siegrist at various times (this comes from references in Fred Bradna's book).

Polidor's make-up was indeed a unique one, which underwent only minor alterations only throughout his career. In the mid-1930's, Ringling Barnum artists used his likeness on a lithograph. Johnny Meah has done extensive research on Polidor's life, with intentions of writing a book. GiGi and I have read some of the work in progress some time ago and it is a fascinating story. 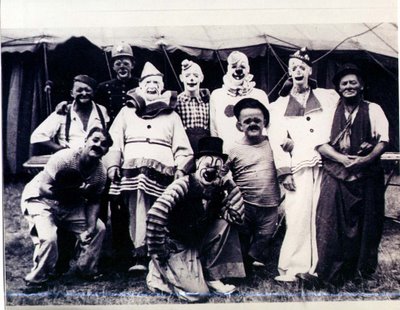 Here we have a photo from the Cole Bros. alley in what appears to be the early to mid-40s. Those I can identify from left to right are Freddie Freeman, Horace Laird, Dick "Roscoe" Lewis down front in his very Lou Jacobs inspired makeup and Boss Clown Otto Griebling (sans any nose putty) on the right.
Posted by Pat Cashin at 6/19/2006 05:18:00 PM 2 comments: 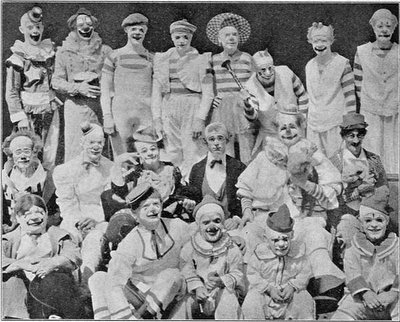 A group shot of some of the Ringling alley of 1934. 2nd from the left in the back row we see Lou Jacobs celebrating his 5th year on the road. His makeup has come together but the proportions will continue to be fine tuned, the headpiece will be added, the costume will come together and it will continue to be honed until it becomes the classic look we've all come to love.

Charlie Bell is in the center of the back row, surrounded by a group of other guys who look like they all shop for striped shirts at the same place.

On the far left in the center row we find Chesty Mortimer looking like he's in deep meditation or something. 2nd from the right in that same row we find Felix Adler, King of Clowns, who looks like he's about to be crowned with a clarinet by a member of the Charlie Bell Mob.
Posted by Pat Cashin at 6/18/2006 05:49:00 PM 3 comments: