This article is from 2006 when the Scotts won the Florida Folk Heritage Award. 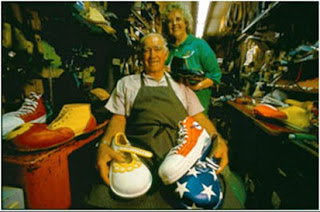 Wayne and Marty Scott are well known for the superb clown shoes they make for clients all over the country. Living in semi-rural Howey-in-the-Hills, they are “can-do” kind of people. They built their own house, learning each step in much the same way they learned to make clown shoes. They talk to people with experience, use the Internet and library, and inspect things very carefully. Both artists are clowns, and both come from families that are good with their hands.

Although Wayne went to clown school in 1968 at Ringling, he worked for much of his life servicing air conditioners and refrigerators. He also had a good job with General Motors, but the pressure gave him ulcers. Once when he was at home sick in bed, he saw an ad for clowns. In spite of the fact that they had four children, Wayne and Marty decided to pack up and travel with the circus. Marty worked on wardrobe and Wayne performed as a clown.

Being around circus people, the Scotts found a niche for themselves. Seeing a need for clown shoes, they carefully cut up an old pair to see how it was made. At first Wayne worked alone, initially placing the clown shoe over the top of an old regular shoe. When he found out that so few people made clown shoes, he studied how to make cowboy boots, which taught him tricks for his own specialty.

After Wayne had worked alone for seven years, Marty joined him in creating the shoes. Their products are considered excellent because they are individualized, comfortable, and long-lasting—about seven years or more. Clowns become so attached to their shoes that they do not want to give them up. When they become worn, they send them back to the Scotts, who refurbish them. Working as a seasoned shoemaking couple, they can produce a pair of shoes in about six hours. The leather goes on last. It is soaked in water and then put in a convection oven at 150 degrees for three hours to dry in order to get its shape. They use horsehair instead of polyester as stuffing to create the shapes. They say that horsehair doesn’t absorb water like polyester does; therefore the shoes do not get moldy as easily.

Wayne designs all the shoes himself. The Scotts make a large quantity of Mary Jane shoes, which is primary type that Ringling orders. Theyalso make period boots for the Sarasota Opera Company and other opera companies throughout the country. In addition, they create a variety of clown props. Today they are passing their unique skills to younger members of their family. 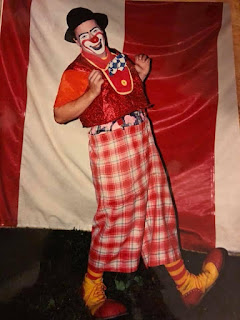 Hello everyone, please forgive my sporadic posting as of late. Being on a circus is a lot more time consuming than I remember! 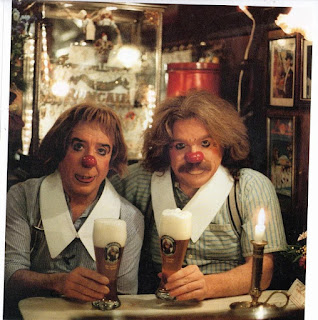