Happy Lou Year from Pat Cashin's Clown Alley! Let's kick off 2022 with an awesome interview with Master Clown Lou Jacobs filmed on the Ringling Red Unit in 1980.
Lou discusses his thoughts on clowning and reflects on his over fifty years (at that point) with the circus.
Posted by Steve Copeland at 1/01/2022 12:19:00 PM No comments:

Spike Jones And The City Slickers 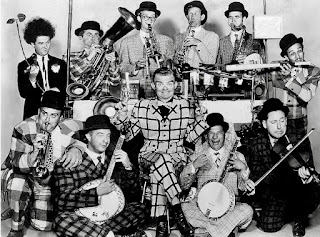 I'm not as great with Spike's band as I used to be, but from left to right:
Top: Earl "Sir Frederick Gas" Bennett, ?, Jack Golly, Winstead "Doodles" Weaver, ?, Joe Siracusa (who was the last surviving City Slicker until he passed away this past November)
Bottom: George Rock, Dick Morgan, Spike, Freddy Morgan, ? (But he looks like juggler Bill King a bit)

Lindley Armstrong Jones was born in Long Beach, California, United States.[1] His father was a Southern Pacific railroad agent. Young Lindley Jones was given the nickname 'Spike' for being so thin that he was compared to a railroad spike.[2] At the age of 11 he got his first set of drums. As a teenager he played in bands that he formed himself;[1] Jones' first band was called Spike Jones and his Five Tacks. A railroad restaurant chef taught him how to use pots and pans, forks, knives and spoons as musical instruments.[3] Jones frequently played in theater pit orchestras. In the 1930s, he joined the Victor Young orchestra and got many offers to appear on radio shows, including Al Jolson's Lifebuoy Program, Burns and Allen, and Bing Crosby's Kraft Music Hall.[3]

Jones became bored playing the same music each night with the orchestras. He found other like-minded musicians and they began playing parodies of standard songs for their own entertainment. The musicians wanted their wives to share their enjoyment, so they recorded their weekly performances. One of the recordings made its way into the hands of an RCA Victor executive, who offered the musicians a recording contract. One of the City Slickers' early recordings for the label was a Del Porter arrangement of "Der Fuehrer's Face".[3] The record's success inspired Jones to become the band's leader. He initially thought the popularity the record brought them would fade. However, audiences kept asking for more, so Jones started working on more comic arrangements.[3]

From 1937 to 1942, Jones was the percussionist for the John Scott Trotter Orchestra,[4] which played on Bing Crosby's first recording of "White Christmas".[citation needed] He was part of a backing band for songwriter Cindy Walker during her early recording career with Decca Records and Standard Transcriptions. Her song "We're Gonna Stomp Them City Slickers Down" provided the inspiration for the name of Jones's future band.[5]

The City Slickers developed from the Feather Merchants, a band led by vocalist-clarinetist Del Porter, who took a back seat to Jones during the group's embryonic years.[6] They made experimental records for the Cinematone Corporation and performed publicly in Los Angeles, gaining a small following. Original members included vocalist-violinist Carl Grayson, banjoist Perry Botkin, trombonist King Jackson and pianist Stan Wrightsman.[citation needed]

The band's early records were issued on RCA Victor's budget-priced Bluebird label, but were soon moved to the more-prestigious Victor label. They recorded extensively for the company until 1955. They also starred in various radio programs (1945–1949) and in their own NBC and CBS television shows from 1954 to 1961.

The liner notes for at least two RCA compilation albums claimed that the two Morgans were brothers (the 1949 radio shows actually billed them as "Dick and Freddy Morgan"), but this was not true; Freddy's real name was Morgenstern.[8] Peter James (who was sometimes billed as Bobby Pinkus) and Paul "Mousie" Garner were former members of Ted Healy's stage act on Broadway. James joined Healy for a two-year run in the Shubert revue A Night in Spain (1927–1928) where he worked alongside Shemp Howard and Larry Fine. Mousie joined with Healy from 1931 to 1932 after Moe Howard, Larry Fine and Shemp Howard had their first split with Ted, and with fellow Healy "stooges" Dick Hakins and Jack Wolfe, appeared in the Broadway shows The Gang's All Here and Billy Rose's Crazy Quilt. Mousie, with Hakins and Sammy Glasser (aka Sammy Wolfe) rejoined Healy in 1937 for radio and personal appearances, until Healy's death in December 1937.