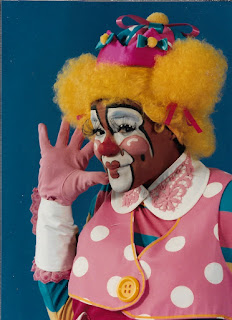 Stephanie Knox attended the Ringling Clown College in 1988. I do know in the late 90s/early 2000s she was working at Circus World Museum in Baraboo, WI, possibly at the Research Library. I would appreciate any other pertinent info anyone can provide. 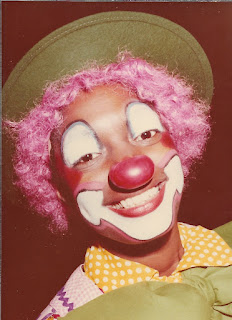 Gloria McConnell attended Ringling Clown College in 1980. Unfortunately that is the only information I have about her. Would any of her classmates be willing to help me fill in any other pertinent details? 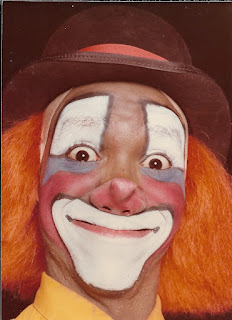 George Leverett is a 1981 Clown College graduate who toured with the Blue Unit in 1982 for the first year of the 112th Edition of Ringling. In the mid 90s he was working with the Red Unit as a crew member.

I would appreciate any more information on George that anyone might have!

Bernice Collins graduated from the Ringling Clown College in 1977 and toured with the Ringling Blue Unit as a clown for the 108th Edition in 1978 and 1979. Off the top of my head, I believe Bernice was the first African American woman to be hired as a clown during the Feld/Clown College era.

Bernice wore many different hats with Ringling over the year. She was a dancer, horse presenter and even a tiger presenter, mentored by the late, great Charley Baumann.

She also worked various behind the scenes jobs with the Big Apple Circus, Cirque Du Soliel, and the Alvin Ailey American Dance Theater.

Learn more about Bernice thanks to the Uncle Junior project:

Huel Speight graduated from the Ringling Clown College in 1980 and joined the Blue Unit for the 1981 season. After 10 years on the Blue Unit, Huel switched to the Red Unit in 1991, where he remained in the Alley until the end of the 1996 season. 16 years on Ringling. That is certainly one of the longer runs during the Feld/Clown College era. I can only think of Frosty Little, Jon Weiss, and Tom and Tammy Parish who were Clown College graduates and were on the show longer than him.
After leaving Ringling, Huel began performing as part of the Circus Circus Clown Alley in Las Vegas, NV. He continues to perform there to this very day!
Most of the footage I have of Huel is different juggling routines he did throughout the years, but this is a Come In gag he performed with Christoper Hudert in 1991 for the 121st Edition.
I think Huel should take over weatherman duties on the Today Show. Who's with me?!
Posted by Steve Copeland at 2/09/2022 10:12:00 PM No comments: