A British Pathé film from 1961 entitled Girl Clown showing Valentina Rowland, Nicolai "Coco" Poliakoff's granddaughter, performing as an apprentice clown in the Bertram Mills Circus.
In addition to Coco, Jimmy Scott, Little Billy, and Little Nikki are featured.
Posted by Steve Copeland at 12/24/2020 09:20:00 AM No comments:

Mike Snider backstage after performing the mouth chase on Vidbel's Olde Tyme Circus in the 1990s.

The mouth chase was first performed by Steve LaPorte and Teri Dryden on Ringling in the 1970s. Since then it has been performed again several times on the Ringling show, Vidbel, Shrine dates, Kelly Miller Circus, and even (for a very brief time) at Cirque D'Hiver Bouglione in Paris! 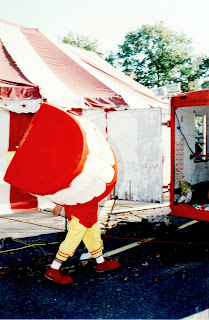