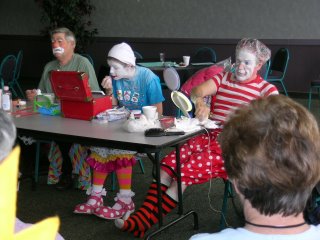 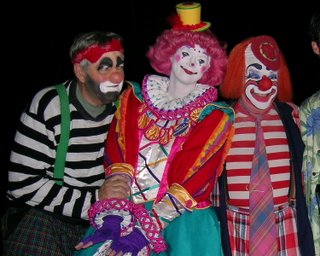 After stating yesterday that Leon and Frosty had two of the most instantly recognizable clown characters of the early Clown College era, here come two more...

I've never had the pleasure of meeting Earle but I've met Jim on a few occasions and he's one of my FAVORITE people in the world to talk to. What a great storyteller!

We got to talking at the Clown College reunion in 2001 and were both so wrapped up in the conversation that we didn't realize that almost 2 hours had gone by, everyone else had left and that they'd closed the Adventuredome and we were both now locked in!

Jim's tramp makeup, which once seemed like such a unique and stylized break with tradition, now (thanks to Russian clowns in Slava's Snowshow, AGA-BOOM, "O", and La Nouba) looks amazingly contemporary and cutting edge! I doubt he has any idea just how avante-garde he is!

They are joined in the center by someone who deserves a lot of credit, Tricia "Pricilla Mooseburger" Manuel Bothun, a great clown and clown arts educator. She has helped hundreds of clowns to improves their makeups, costumes and characters through her many educational programs.

George Carl is the third man across on the front row. He's in his
acrobatic costume with the Arabic looking doo rag. Thought you'd like
to know.

EVERY performer should own all three volumes of Charlie's ECCENTRICKS series:
http://www.charliefrye.com/ECCENTRICKS_DVDs/eccentricks_dvds.html
Posted by Pat Cashin at 10/07/2006 09:29:00 AM No comments:

This just in from my friend John Cooper in the UK.

I can't wait for more info on Jacko Fossett and Charlie Cairoli...

Hi, Pat.
As before, this is going to both addresses. If you
plan to hold on to it for a while, please let me know
it's arrived as I've been having problems with e-mail
of late.

Shortly I shall send a piece concerning Bubi and Jule,
who appeared on 14 July. You may want to dig out a
photo.

And then it must be Charlie Cairoli, although the
problem is what to leave out!

Still to establish contact with any member of Nuts and
Bolts.

At some stage I shall probably send something on Jacko
Fossett as it would be a sin to omit him from GREAT
Circus Clowns of the Past. I'd better try to find a
suitable photo and send it down the line. Not that I'm
really computerate - but I know a man who is!

Mention of George Carl on 6 October reminds me that he
appeared on 8 July as well, the movie/film (I'm
bilingual!) "Funny Bones" being mentioned at the same
time. Reference to that cinematic production also
occurs in connection with Ben Dova (10 and 11 July).

I must make one correction. The comedian/actor Freddie
Davies was known as "Parrot Face" and not "Parrot
Head" as stated.

My friend David Barnes was circus consultant for the
movie, the circus sequences being shot at Blackpool
Tower Circus.

It is Lee Evans himself who climbs the sway pole -
which is the connection with Ben Dova. The prop itself
belonged to a gentleman called Fattini, who had bought
the prop, the act and the name from a retired artiste.
Fattini had been booked to double for Lee Evans when
it came to climbing the pole. Lee decided he could do
it himself - and he did. Which must have amused the
insurers!

David Barnes tells me that Lesley Caron (who also
appeared in the movie) dined with the crew rather than
disappearing in to her trailer.

If you haven't seen "Funny Bones", I should warn you
that the humour is very dark at times.

A question connected with Ben Dova. Did he have a son
who worked as "Gil Dova"? Gil was a juggler who worked
the cigar boxes whilst perched on a pedestal. He
married a French antipodiste, Regina Baranton, who
worked with her sister Eliane as The Baranton Sisters.

I worked a season with Eliane's daughter Sylvana.
Sylvana is French through her mother and Italian
through her late father ("Johnny" Biasini). Her
husband (Abdul Cheddadi) is Moroccan. Their son
(Brandon) is - well - confused! Not that he need be,
because he was born in England.

I think I asked you a question just now. 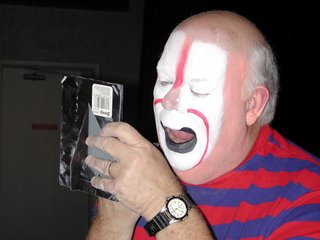 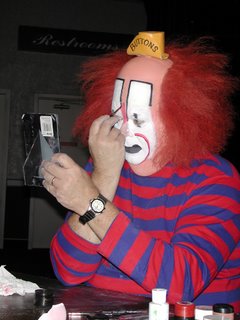 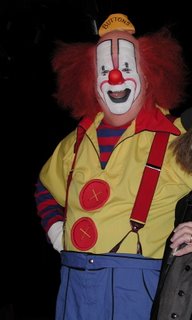 The transformation of 9' 3" tall Leon McBryde, soft-spoken southern gentleman, into Buttons, alongside Frosty Little maybe the most instantly recognizable of all of the early Clown College graduates.

These photos were taken at the WRCA makeup demonstration in 2003.

In addition to being a wonderful clown and a master at the art of cicus advance work, Leon is has been a tireless educator to countless clowns throughout the years.

And the man makes excellent clown noses! I wear his Circus Pro CP-XL. 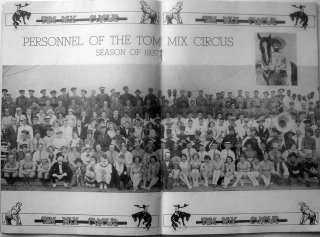 It is reprinted here without permission yet because it's early in the morning and I don't want to bother a man like that at an hour like this.

This photo is interesting for a few reasons.

The Tom Mix Clown Alley of 1937 featured quite a few folks that we've seen here before.

Circus comedy notables amongst the crowd are the George Hanneford riding family, Bumpsy Anthony, Glen "Kinko" Sunberry (listed as "Glen Kinko") and his wife "Mary Kinko" ( MRS. Kinko was a clown too?!?), Jimmy Davidson (who worked many Shrine dates), Jack Knapp (most likely the "Happy" Knapp whose picture we saw here two weeks ago) and one name that jumped off the page at me...

Somewhere in this photo is the one and only George Carl, early in his career, working in whiteface.

By process of elimination, I believe that George Carl may be the whiteface in the front row, four people in from the left of the staples in the center, seated next to Bumpsy Anthony.

Bozo as Lou/Lou as Bozo 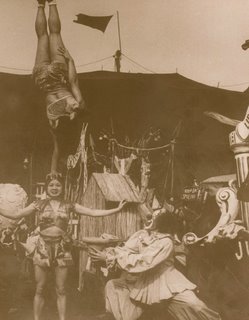 Not a great photo but you should be able to make out Lou Jacobs in an unusual spec costume that seems to be inspired by the Commedia Dell Arte. This photo is from the early 40s and about the time that Capitol Record's artists would be looking through photos for "inspiration". 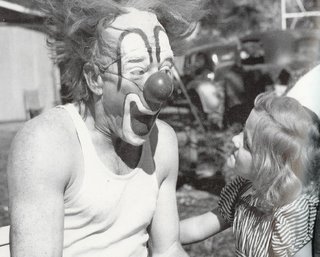 Another early 40s photo of Lou scanned from the Steinmetz book THE CIRCUS COMES HOME. Either Lou never washed his yak hair wig or he was experimenting with a fright wig at the time. Either way, the face, the hairstyle and the round rubber ball nose are all present in the illustration below. 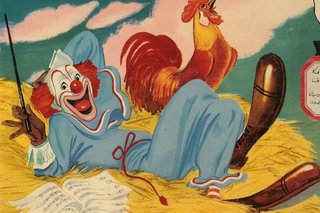 The cover of the Capitol record-reader BOZO ON THE FARM. The makeup, trick wig, rubber ball nose, as well as that spec costume have all been combined to create Bozo the Clown.


It's pretty obvious that Lou Jacobs was the inspiration for the design of Bozo the Capitol Clown but I still talk to people who just don't see it.

The character that we all know as Bozo the Clown started out as "Bozo the Capitol Clown", was the mascot for Capitol Record's children's division (he was later redesigned after the character was purchased in the 50s by Larry Harmon and became "Larry Harmon's TV Bozo, the World's Most Famous Clown") and was the main character in the very first "record-reader".

A 'record-reader" is a book and LP set where actors read the text of the story and let you know when to turn the page.

Bozo's record readers were an immensely popular series that ran through the 40s and into the early 50s. They spawned a series of comic books, toys and a few early television shows. Bozo was played throughout the series by Pinto Colvig, a former circus clown and the voice of Disney's Goofy.

How did Lou feel about all this? He must not have minded too much. In the Winter Quarters scene where Charleton Heston walks through Clown Alley early in Cecil B. DeMille's THE GREATETST SHOW ON EARTH you can see very clearly that, taped to the inside lid of Lou's trunk, is a picture of "Bozo the Capitol Clown".
Posted by Pat Cashin at 10/04/2006 11:37:00 AM No comments:

Growing up, this clip from Sesame Street (featuring comic and character actor Dennis Allen) was the only instruction that I ever had in the application of clown makeup.

It says nothing about powdering and it's all done backwards.

Which explains the trouble that I've always had with makeup design and application ; )


It's followed by the two online comments that the clip received. 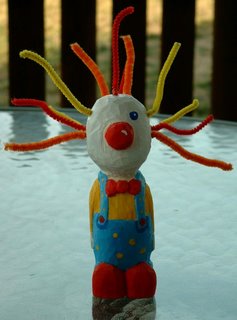 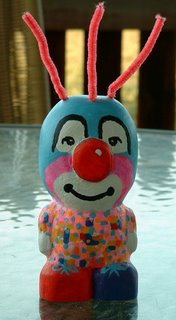 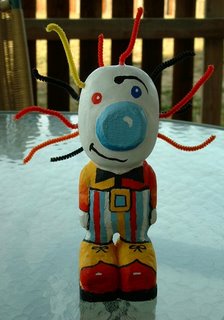 In keeping with our recent Sunday morning tradition of turning the blog over to viewing great contemporary works of clown art, here's some Native American-inspired circus clown art from Cowboy Mike Keever.

Here are 3 of many, many different clown woodcarvings that I have made...I like Indian Art...many tribes like the Hopi, have Kachina dolls that are a tribute to their Sacred Clowns.......they know how important the healing power of laughter is...and continually celebate it!!! I have talked to some of my Native American Friends about the parallels of our worlds....I told them that I wanted to make these to celebrate the sacred clowns in my tribe...

They thought it was cool.... and especially with some of their artist who are colorist and use the bright colors like I do alot to say what I want to say in my work! Some may look like certain clowns I know..others are just kind of a tribal looking figure from my imagination.