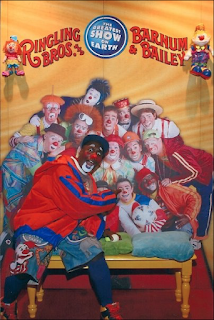 I know it is March, but I still have more to say on Clown Alley Black History month.
Jamarr Woodruff could have auditioned to be in the 1997 Clown College class, which turned out to be the school's last, but instead he went to California to attend the Dell'Arte International School of Physical Theater. He later attended the Clown Conservatory in San Francisco, CA as well. That is where he caught the attention of Ringling V.P. of talent, Tim Holst.
Jamarr was hired to join the Red Unit's 135th Edition of Ringling for the 2006 season, but after less than a week he was swapped to the Blue Unit to replace a clown who was let go during Winter Quarters.
I worked with Jamarr, aka "The Clown of Crunk" in 2006 and 2007 for the 136th Edition of Ringling aka The Circus of (Broken) Dreams. Jamarr also stayed for the first year of the 138th Edition, Over The Top.
Jamarr left the Blue Unit at the end of 2008 and since then has performed advance PR for Ringling and also clowned in hospitals.
Learn more about Jamarr at the Uncle Jr. Project:
https://www.unclejrproject.com/jamarr-woodruff
Posted by Steve Copeland at 3/04/2022 12:24:00 PM No comments: