Jacko Fossett was Britain's best-loved clown, with a career that spanned nearly 60 years. When asked what were his happiest memories under the Big Top and in the enchanted sawdust ring of the circus, Fossett's response was straightforward. "They were all happy memories. I was lucky to have been born in the business. I have no regrets and would do it all again."


The man who became Clown Jacko, known to his many friends as plain Jack, was born Robert George John Francis Fossett into England's oldest circus dynasty. The son of a clown, also known as Jacko, and a wire walker, Maria Proctor, he first saw the light of day in Hull in 1922 where his parents were appearing at the famous Hull Fair. By the time he was about eight he was performing in the ring himself, following in the footsteps of his sisters Margaret, Louise and Emmie, who all became trapeze artists.

"When I was six years old," said Jacko Fossett,

I remember my father as a clown, making up his face in the caravan. He made the white colouring out of zinc and lard, a stick of red for his nose, and the black for his eyes came from the soot in the chimney.

There was no designer theatrical makeup in those days.

Jacko's earliest years were spent with his Uncle Bob's show, Sir Robert Fossett's Circus, and with Chapman's, a leading circus in the 1930s. While Jacko was at Chapman's, his father died and he was packed off to school in Northampton, the home of the Fossett clan.

Of the Fossetts, many of whom still populate the circus world, he was fond of saying, "It's not a family, it's a disease." It is the world's oldest circus clan, and at one time it was said that every circus in Britain contained at least one member of the family, who are noted for their red hair.

Jacko Fossett's happiest days before the Second World War were spent with Chapman's, earning 12 shillings a week for a daring trapeze act with his sisters. He was appearing in Morecambe when war broke out, and soon afterwards he enlisted, serving in the RAF and being posted to Ensa.

Ralph Reader was producing shows to entertain the troops, and Fossett found himself in the company of performers who later became great stage and television stars, among them Peter Sellers, Cardew Robinson, Dick Emery and, his best chum at the time, Tony Hancock. Fossett already had a desire to be a clown, and performing in comedy skits with these artistes developed his abilities, so that when he came out of the forces he joined the circus of his cousins, Bobby and Tommy Roberts, as their principal clown.

He stayed with the Robert Bros Circus for 14 years, despite offers from Bertram Mills Circus. He was not only principal clown, but its tent master too, and nightly got kicked around by a mule, and performed in a comedy boxing bout with a very lively kangaroo. "When the kangaroo died, I cried like a kid because it felt like I had lost one of my family," he said.

When Bertram Mills Circus finally persuaded Fossett to sign a contract, he entered the world of "big time" circus. He travelled with this prestigious show until its tenting circus closed in 1964 and worked at Olympia, London, with it until the final season there in 1967.

Fossett was invited to appear in Denmark with Cirkus Schumann, 1966-69, and then went to Cirkus Benneweis. After seven summer seasons in Denmark, he was back in England, spending six years from 1973 in Great Yarmouth at the Hippodrome Circus. After the closure of Mills' seasons at Olympia, he was invited to work at Belle Vue, Manchester, and appeared there from 1968 until 1982.
But Fossett, along with his long-term clowning partner Little Billy, a British dwarf comic who worked with him for years and with whom "I never had an argument", was always in demand for work with top circuses around the world. He worked in Munich for Germany's biggest circus, the Circus Krone, run by Carl Sembach, whom he had known before the war at Chapman's Circus, and who had courted one of Fossett's sisters. He was in Paris with Cirque Jean Richard, in Italy with Circo Enis Togni, in the huge winter circus of Vienna, in Puerto Rico, and in 1983 was in Australia with "The World's Greatest Circus Spectacular".

He said that his worst experience on the Continent was when he left Circus Krone in Munich to join Jean Richard. "I'd paralysed them in Munich, we went so well . . . and then I went to Paris, did the same gags, same acts, and died a terrible death." Of all circus acts, comedy is the thing that travels least well. What appeals in one country does not always go well elsewhere. Luckily, British clowns have often found success abroad.

In 1983 Fossett went to the prestigious International Circus Festival of Monaco for Prince Rainier, but on the opening night he was despondent at the reaction he had had from the rather starchy audience and asked the ringmaster to help him. Together they worked out a way of presenting his Anglo-Saxon humour to advantage, and he ended up a success.

Fossett's biggest ambition had been to appear as a clown at the Blackpool Tower Circus, where his idol Charlie Cairoli had starred for nearly 40 years. He got his wish in the summer of 1990, but his success was short-lived. He had already suffered a number of minor heart scares but in the middle of the Blackpool Tower season he had a major heart attack and doctors advised his retirement from the ring. The old trouper was, however, well enough to return on the final night of that season, the recipient of a special award from the Circus Friends' Association of Great Britain. Ten years later, the showmen's newspaper The World's Fair gave him a Lifetime Achievement Award at Blackpool.
Jack Fossett retired to Skegness with his wife, to the bungalow they shared with his wife's twin sister.

He had married Constance Reid in 1960, having courted her for some two decades. Connie and Marjorie Reid had toured in variety for 25 years as the Reid Twins, one of Britain's leading novelty acrobatic acts, and Fossett waited patiently until variety and music hall were dead, and the girls' own careers over, before marrying Connie.

And, although Connie became the butt of many of his jokes in the circus ring, theirs was an ideally happy marriage. She was indeed a long-suffering partner, especially in bed. "I used to lie in bed at night," he recalled, "and a gag would come to me. I'd have to wake up my wife Connie and she'd have to write it down in case I forgot it by the morning." 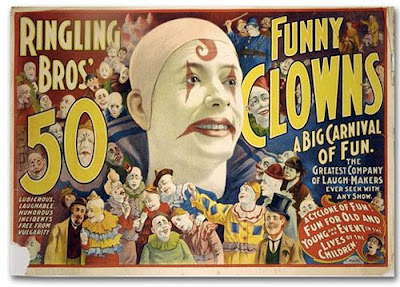 We are not now that strength which in old days
Moved earth and heaven; that which we are, we are;
One equal temper of heroic hearts,
Made weak by time and fate, but strong in will
To strive, to seek, to find, and not to yield.