Six silent short films of the famous French clowning duo, Foottit et Chocolat filmed by the Lumiere brothers.
Posted by Steve Copeland at 1/29/2021 09:28:00 AM No comments:

A BBC interview from 1994 with Charlie's wife, son, and renowned ringmaster, Norman Barrett, discuss the launch of the Charlie Cairoli Appreciation Society.
Posted by Steve Copeland at 1/28/2021 08:29:00 AM No comments: 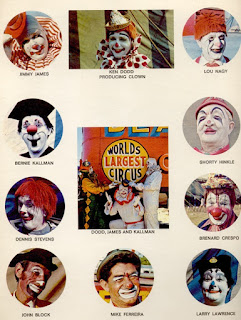 From the collection of Ralph Pierce. I'm gonna guess this is from the 1970s. Please correct me if I am wrong.
Would love to hear more about John Block and Larry Lawrence, as I haven't heard of them before.
Posted by Steve Copeland at 1/27/2021 07:50:00 AM No comments: 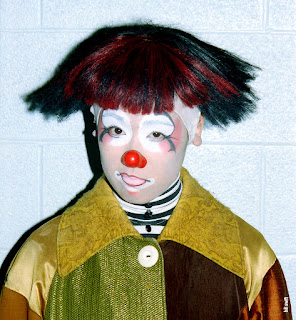 Tina Aguirre-Groff, photographed by long time Ringling Blue Unit Clown Alley Wardrobe man, Bill Swift.
Tina graduated from Ringling's Clown College in 1995 and toured with both the Red and Blue Units from 1996-1999. This photo was most likely taken in 1997.
After Ringling Tina continued clowning, notably with the Kinoshita Circus in Japan and with a troupe of theater clowns from L.A. who called themselves The Funky Punks.
Posted by Steve Copeland at 1/25/2021 12:26:00 PM No comments: