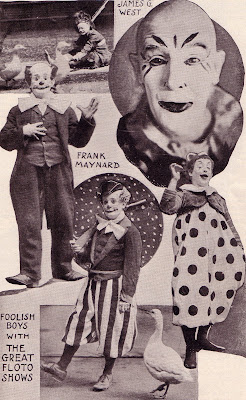 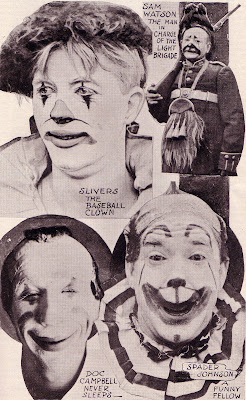 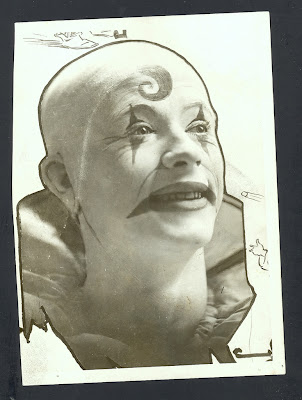 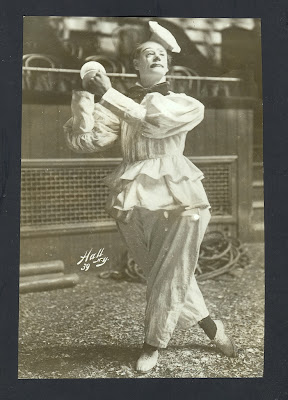 Not Oakley but another clown from the same era.

I may be wrong but I think that my pal Bryan Fulton (who killed at the recent Happy Tiandu AEMI World Clown Festival) may be the only professional clown in America performing the classic table rock act.

Here he is folks, as taught by Mitch Freddes and performed in honor of folks like Dime Wilson, Dick Lewis and Bumpsy Anthony, here's the one and only Bryan Fulton performing his table rock on Ringling Red as an emergency stretch gag one day when there was trouble putting up the tiger cage... 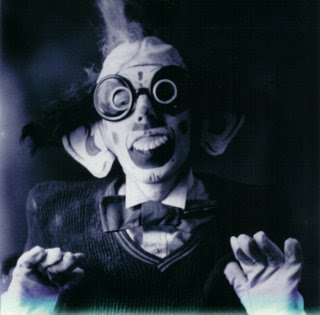 As is our annual tradition here at CLOWNALLEY.NET, here is the infamous Jerry Bangs to wish you all a very Happy Halloween.

He's teaching a makeup workshop at the World Shrine Hall of International Clowns in America for Jesus' CLOWN-A-ROUND-A-DING-DONG 2008 convention Mooseknuckle, AK this spring if anyone is interested 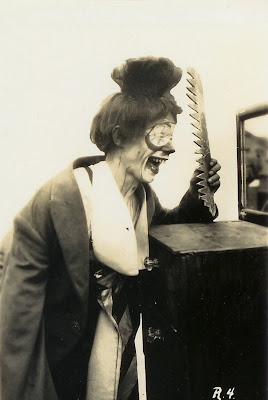 I'd been doing one for the last 3 years when I found this photo.

"Everything old is new again..."

Another video uploaded to YouTube by Sandy Weber, this time it's Pio Nock's scenes from the John Wayne film CIRCUS WORLD.

Your recent post of Pio Nock reminded me that I have footage of him
from the movie Circus World (which I'm sure you have seen). I have
cut all of his scenes into one clip and uploaded my first YouTube
video - Hurrah!!

This includes the scenes where he doubled for Richard Conte on the
highwire. I remember seeing his act when he appeared on Ringling and
it was just as thrilling (and funnier) seeing him perform live over a
tiger's cage as it appears on film. We also get to see him doing a
funny plate smashing routine. Do you happen to know the name of the
white face clown appearing with him?

Sandy Weber has uploaded this clip of the Rastellis entree from the Mary Hart hosted television show GREAT CIRCUSES OF THE WORLD. It purports to be from Stockholm Sweden in 1978 but it was shot for a special on circus clowns a few years earlier than that.

The other day I received very nice messages from the grandson and daughter of longtime circus clown Dick "Rocco" Lewis. His daughter Kathleen was kind enough to help correct some misinformation here about her Dad so I thought that I'd dig around the web and see what else I could find about him.

Below you'll find the clown-relevant snippets from a great article that I found on the Circus Historical Society website about the Clyde Beatty-Russell Bros. Circus tour of 1944 where "Rocco" was prominently featured...


...The clowns handled their trunks and props and put up the clown dressing tent and tore it down.

..."It went along like this until we got to Pasadena," related Matthie, "when the clowns went on strike. We went to Jack Joyce and told him that we wouldn't move the trunks or put up the dressing top and tear it down anymore. He gave us a hard look and said it didn't make any difference whether we were on the show or not. So we went back to hauling the trunks and putting up the tent and tearing it down."

...In addition to the above, Matthie's work consisted of setting up the bandstand, calliope and its motor and compressor, the P.A. system (this included tw 6 ft. stakes), ticket sales downtown, cigars, candy, and cigarettes, work the matinee and night show, and then tear down and load all of the above. He was paid separately for all of those jobs. Putting up and tearing down the clown tent and handling the clown props was part of the clown act and was included in his pay for clowning. 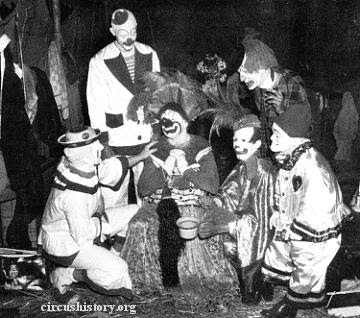 Clown alley in San Diego. Dick Lewis is in the center with Walt Matthie at the upper left. Alva Evans is at the right front. Doc Hayden photo
(*I would add that it looks like Dennis Stevens kneeling to the right of Dick Lewis with Art Cooksey standing above him. ~PC)

...The clowns were introduced in Display No. 3. The Official Route Book for the season lists eighteen clowns, nine of whom were on the show for the road tour after the show left Los Angeles. The others were present only for the big 24-day stand; and one joined in Kansas to finish the tour. The nine who toured were Brownie Gudath, Rene Thezan, Dick Lewis, Walt Matthie, Alva Evans, Alex Lowande, Gus Lind, George Perkins (who left in Idaho), and Hughie Kyle.

...Following the web act, Albert Fleet presented Clyde Beatty's two chimpanzees, "Mickey" and "Minnie." "Mickey," the male, was a powerful ape who hated clowns and often went into a rage at the sight of anyone wearing white clothing. This even included Beatty who always wore a white uniform when working. Since the clown fire-house number frequently followed Fleet's act, "Mickey" had a great opportunity to unleash his vengeance upon the men in white-face. Chairs, props, and an occasional axle flew through the air as the men in white entered, and the chimps left, the arena. Alva Evans wore a white clown suit and a monkey mask in one number and "Mickey" seized the bars of his cage and rocked it furiously every time he spotted the clown in this attire. To show that he was truly impartial, he bit off the end of Albert Fleet's thumb during the Los Angeles stand. 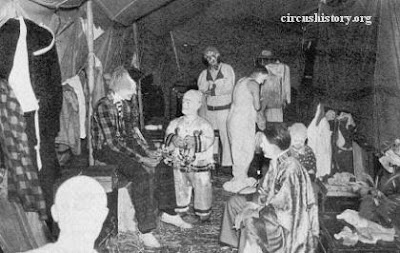 ...The Wild West concert was introduced and then Dick Lewis played the part of the frantic bride in the burning house. Brownie Gudath was inside with the fire pot and the rest of the poeys tried to put out the fire and catch the rather weighty Lewis as he leaped to safety. The fire pot, manned by Gudath, was constructed from a coffee pot which burned gasoline. Clouds of smoke were created by blowing through the tubing into the pot. Later, at Anacortes, Washington, the long grass inside the house caught fire from the torch and the clowns outside threw quantities of water into the enclosure to save Lewis and Gudath from being toasted. Upon emerging, these two smoked-up clowns berated the others for getting them wet! 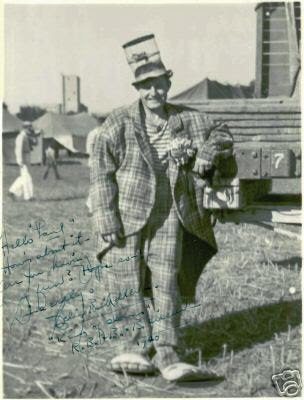 An unusual 1940 autographed photo of "The King of Clowns" Felix Adler in costume but out of makeup.

I can't be certain, but I have the strong suspicion that Felix used his starched white and spangled wardrobe exclusively for "picture day" at the beginning of the season, switched to a similar wardrobe in red or yellow for the indoor dates in NY and Boston and then wore this plaid suit for most of the remainder of the season for the outdoor dates.

Duane "Uncle Soapy" Thorpe would have taken a page out of that book when he'd have his program picture taken in a beautiful new costume with his bald top burgundy yak wig all styled and set and then switch back to his trusty sythetic orange afro and red jacket as soon as the season started.

The birdcage top hat that Felix is sporting in this photo is now in the collection of the Circus World Museum in Baraboo, WI. 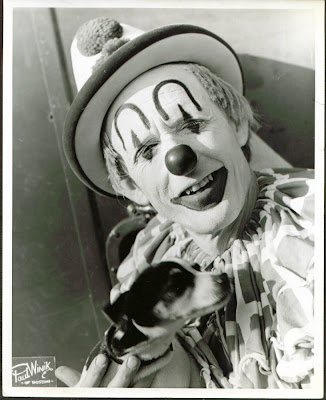