An Interview With The 1908 Barnum & Bailey Clown Alley

The following interview appeared in several newspapers across the country in early April of 1908.  I think it's interesting that a woman is conducting the interview.  The clowns are socially awkward.  Hardly anything has changed in 108 years.  HA!  108!

Before we begin, here's a listing of all 36 clowns who were in the alley that season
(this is a clipping from the 1908 Barnum & Bailey program)

NEW YORK, April 4 - Many of the costumes that the Barnum & Bailey clowns offer for the inspection of the people who come to see them are worthy of special mention.  They are the very last cry in things sartorial, and if broadway does not copy them, well, it's a loss to the world of the Great White Way, that is all.  Here's a chance to get away from the rule of the conventional.
One of these outfits has a waistcoat of large plaids.  It is worn with a coat of elephant's breath that has short bobby tails wired to give the required nonchalant air.  The trousers are modestly high and only exhibit four inches of snow white hose.  A long, light wig lends distinction.  The shoes are of the flapping kind.  Color, hay.
A frock coat of the vintage of 1812 is worn with a dark red sweater, champagne-colored stockings and no shoes.  A mule, heavily belled, should accompany the wearer.
With a swallowtail cut to half the usual length at the back, a bright red necktie with flowing ends is very effective.  This should enclose collar with six inch points, built so as to hold the head very erect.  Large loose shoes that beat time with the walk and visible stockings are worn.
Thin white batiste with many frills.  Red belt drawn taut over expansive waist girth, black stockings, flap shoes, small linen cap set flirtatiously on the side of riotous yellow curls.
A policeman's coat is worn over tip-tilted bustle and shoulder pads.  It has three rows of buttons down the front, the middle row very small.  A blue flower on the left breast gives a Paquin-like air.  A clay pipe and whiskers are absolutely indespensible.
With the radiance of this accumulation of fashions and folly in the eyes, it is hard to realize that the rows of men who sit silently in the press room after the circus is over are the very ones who a few minutes before flaunted their magnificence before thousands of spectators.  All the white zinc and grease paint has been washed off, and the prismatic attire replaced by the common, ordinary Maison Square Garden kind of business suit, a little the worse for wear in a few instances, showing the storm and stress of life on the road.
There is not the slightest attempt to get away from the current mode.  Everything is rigidly conventional and correct.  Each one of them has a clean shave, a shoe shine, and immaculate linen.
There are fat men and thin men, old men and young, those experienced in circus ways and those to whom life has still something to offer besides a weekly salary and a problematic engagement for the next season.  But the cheerful ease of the ring is replaced by what in circus talk is called sawdust fright.
It is caused by the unusual experience of being interviewed.  All the merry quips and cranks which people ordinarily associate the genus Clown are gone.  They sit on the extreme edges of their chairs and wait for each other to speak.  When one ventures, after explanatory cough, the rest admire and envy his eloquence and self-possession.
"If we'd only known about it two days ago," one of them confesses, "we'd had a chance to think up something to say.  Lord, lady, we've got stories enough.  Some of us's been more'n forty years in the clowning business.  But you can't think of stories right off the bat, begging your pardon, this way." 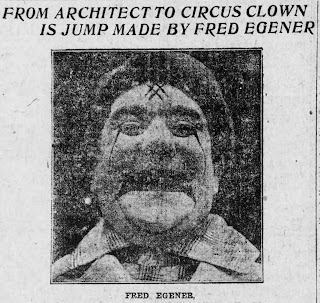 "How do we begin?  Well, we're willing to tell that if you'll promise not to ask how we end."  This is from one Egener in the rear, who looks as if his clowning had never interfered with sleep and appetite.  "It--well, it was a good many years ago and I didn't know anything about being a clown except that I wanted to be.  There was a little show in town-- in the middle west--and I put some glycerine and oxide of zinc on my face--I knew that much--and applied for a place, hearing that there was at that time a deficit of clowns.  I told the manager that I was great on the gab and could sing like a wren.  He hired me on my nerve and offered me $12 a week, which I took, after some hesitation.  I wasn't getting anything at the time and it seemed bigger than any salary I ever got since.  I made a great hit with my song, which was in the days before it got too common.  It ran:  'Willie had a little gun--now he's gone, gone, gone.'  The manager told me he considered me the greatest clown in the circus world, but he said it with one eye closed.  I drew my salary for six weeks regularly, then there was a lapse for sixteen, and I could only touch the manager for about two bits a day.  At the end of that time I went home in a box car and put my trunk in pawn before I started.  Same with you fellers?  Beginning's nearly always identical.  Next year I got $35.  Same with you fellers?  Thought so."
The dark man who speaks next was with Walter Mains show in the beginning.  "I was in the concert that took place after the show, and one day it occurred to me if I could make $12  week for that, why couldn't I make $35 being a clown?  I put it up to the manager and he gave me a try.  I succeeded and am now at the top of my profession."
There is a decided movement of disapproval.  One says:  "We ain't sayin' you ain't, but the profession of clowning is different from a turnip in that it has more'n one top."
"Got that down in your notes?"  says the tall man, "for if you ain't, think I may use it myself.  We're always looking about for chunks of wit, for when the circus season is over nearly all of us go into vaudeville, and some of us have even tried the legit.  I played two seasons in Wilkes-Barre, Pa., in a temperance drama called 'Dot, the Miner's Daughter.'  The neighbors said I was good but the general public agreed with my family.  I never went back."
"Some people think that the clowns live together, herded like freaks, and I met someone around asking for the clowns' boarding house.  The truth is that most of us have been born and brought up in the business.  We married in it and our children are taught the circus stunts as soon as they begin to walk and talk  but we'd all of us like them to go into the legitimate and make a name for themselves, get away from them long footprints of the one-night stands and the seasons on the road."
"We don't any of us retire rich.  Barney Baruato, the South African millionaire, was the only one and the disappointment of riches or the contrast between his life as was and is made him commit suicide in midocean.  There's many of us have left clowning for good.  Richard Golden and Billy Clifford, for instance, but perhaps you'd better not mention their names and give 'em free advertising."
"The only real excitement of the clown's life begins when he starts in betting.  Every Saturday night in Clowns' alley, as we call the clowns' dressing room, we bet on the number of weeks and the town where the circus'll end.  It's in the Clowns' alley that all special announcements are made and anyone has the privilege of stepping on the table and making a little speech.
"The isolation that has been thrust upon us by herding us together in a dressing room, where the proclivities for covering everything with white won't interfere with the rights of others, has resulted in the making of many fine orators and monologuists, whose talents are unknown to the general public."