Tricia Manuel, aka Pricilla Mooseburger, performing her rabbit in the hat gag for Come In on the Blue Unit's 114th Edition in 1985.
Tricia still performs this routine as part of her shows.
Posted by Steve Copeland at 4/30/2021 07:35:00 AM No comments:

24 Hours in the Life of a Clown Trailer

This past weekend I signed up for the Criterion Channel, and one of the pleasant surprises I found was this short film from 1946 about a day in the life of Aristodemo Frediani, better known as Beby.
Beby was partnered for many years with Antonet.
At the time of the filming he is seen performing with his new partner, Maïss, at the Cirque Medrano in Paris, which was a filming location for Fellini's, I Clowns, and also where Buster Keaton performed in the 1940s.
It isn't ground breaking cinema, but it was a fun look at two real clowns of that era. The Criterion Channel offers a two week free trial, and the film is only 18 minutes long, so......
(Also, the film has English subtitles even though the trailer does not)
Posted by Steve Copeland at 4/29/2021 08:46:00 AM No comments: 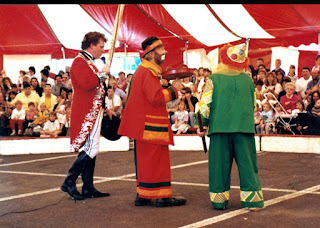 Photo by Paul Gutheil.
Dime and Connie Wilson performing with ringmaster Billy Martin on Vidbel’s Olde Tyme Circus.
Posted by Steve Copeland at 4/28/2021 08:27:00 AM No comments:

One thing I love about clowns and comics that came out of vaudeville and burlesque (and also older European clowns) is how polished yet natural their material is.
The Golf Specialist is a perfect example of an act that has been honed night after night on the road until every laugh is milked from the situation.
Enjoy!
Posted by Steve Copeland at 4/26/2021 08:15:00 AM No comments: