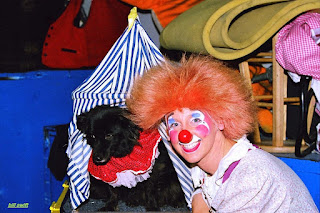 Barbara Nolan (Kinkade at the time), with her dog, Midnight on the Ringling Blue Unit. The photo must be from 1998 because they are posing with her Flea Circus walkaround. The theme of the show that year was Sideshow, so all of the clowns did sideshow themed walkarounds.

Barbara started out as a dancer on Ringling, even participating as the ballerina in the painter soap gag featured in Ringling’s 118th Edition (1988-1989). She attended Clown College in 1995 and toured with the Blue Unit from 1996-1998.

After that she was a part of the Circus Circus Clown Alley in Las Vegas for awhile.