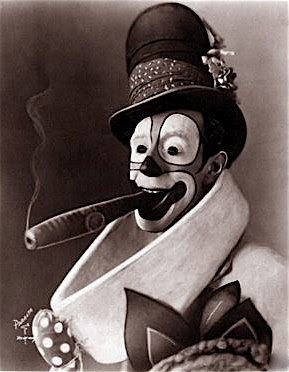 I don't know who this guy is but I sure like his style!

Look at that hat! That collar and tie! That flower! The way that the huge circles of white around his eyes work with the small black circles over his eyelids to give the illusion of a 1920s comic strip or cartoon character.

He looks like he was designed by Bob Clampett or Tex Avery!


Hello Pat:
our mystery clown today is none other than... "Pepito the Spanish Clown" !!!. His name was Jose Escobar Perez, he was born in Spain (duh!) and he was a vaudeville headliner in United States for many years. He can be seen briefly in the circus sequence of "Here come the girls" (1953) with Bob Hope, Rosemary Clooney and Fred Clark and, of course, in the famous "I love Lucy" episode "Lucy's showbiz swan song"; in it, he performs part of his stage act like the imitation of a baby and a lion tamer, and he rides a miniature bike. The trick cello Lucy uses in the pilot episode of the series, later filmed again for "The audition", was his (a couple of years ago it as sold in auction for $34,500). His face was a carbon copy of another famous spanish clown's, Ramon Alvarez Escudero "Ramper".

That is Pepito Perez. He was a vaudeville clown, and a very good fishing biddy of Desi Arnaz. He, along with Buster Keaton created the Professor-cello Bit that Lucy took on a stage tour and later used as part of the pilot of 'I Love Lucy". I've been told that Pepito built the cello for Lucy and she worked out some of the bits and timing with Buster. Pepito also appeared on "I Love lucy" as a clown when they needed a few extra minutes of fill when an episode ran short. Pepito aslo provided the baby cries of little Ricky in some of the first baby episodes. When he passed away, his wife found a kinescope of the pilot episode that was used to show sponsors, and it was the only surviving copy and was presented as a TV special hosted by Lucie Arnaz, and later put out on video.

I think his name is pa pito
He is a cuban clown that was a friend of Dezi Arniz. He wsa in the pilot film of I love Lucy

The correct name is PepitoI looked it up.

Yeah, it looks a perfect Winsor McCay character...
Anyway I suspect that cigar, tie, collar and flower are painted on the picture.
About the identity: the closest coming at my mind is the Spanish star clown of the 40s, Ramper.
I will post a picture soon.

I think that's Pepiti Perez, also known as Pepito the Clown.
He was on an episode of I Love Lucy performing his act at Ricky's night club.

After Pepito's wife passed on,a bunch of Pepito's estate came onto e-bay, and I was able to pick up a few of his circus and vaudeville books. His cello was also up for sale, but the price was was out this poor clowns budget. The cello he made for Lucy is on display at the Lucy-Desi Museum in Jamestown, NY.

Wonderful to learn all those biographical notes. So is interesting to know that the make-up effectively came directly from Ramper's. And another Ramper signature feature was the miniature bycicle.
And now, friends, the hunt is open to track the Lucy episode with Pepito's performances....Please, somebody post the video online...

Pat Cashin,
I am shocked that you didn't know that was Pepito from the I Love Lucy legacy.
And here I am thinking you know everything.
HA!

Pepito also does the miniature bike in his routine. It is included in his appearance on "I Love Lucy". I'm betting Patrick can find a copy of this show while in Florida at Disneyworld...

To get information and to see video of "Pepito the Spanish Clown", visit my website under construction at:
http://www.cartychronicles.com/Pepito_and_Joanne/Welcome.html

My Pepito and Joanne website address has changed slightly, making the URL in the above post non-functional. The new address is http://www.cartychronicles.com/Pepito_and_Joanne/Blog/Blog.html . I have posted a lot of information about Pepito the Spanish Clown (aka Jose Escobar Perez or Pepito Perez) and his wife and performing partner Joanne Perez (stage name Joan Falcy, birth name Margaret Janet Zettler). I recently purchased two boxes that I lovingly call the "Pepito and Joanne Archive" containing all their newspaper clippings and publicity photos, and will be scanning all this to add to my website incrementally. On my site, I also have several links to YouTube videos pertaining to Pepito.

Well, my URL was truncated in both comments above.

Allow me to try again.

My new URL for my website honoring Pepito Perez and his wife Joanne Perez is:

Do you have this photo in YOUR collection?
I have all the negatives.
Since the photographer Paralta's symbol is on your photo, I am wondering if you have the original.
Did you buy this from Pepito's estate sale on ebay?