Hearty congratulations go out to Joel Jeske and Mark Lonergan on their Drama Desk nomination for their show CUT TO THE CHASE! 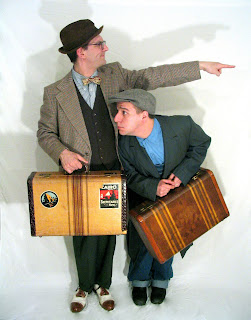 The Awards Show is on Sunday May 18th, 2008.
I believe it is going to be broadcast locally.

Mark and I are both freaking out.
We have been nominated along side Broadway productions and Million dollar budgets.
Our show cost roughly $32.50.

We were told last night, while rubbing elbows with Linda Lavin and Harvey Fierstein, that what we did not have in budget we made up for in technique, craft, earnestness, and heart.

Heart? Joel Jeske is capable of heart?
Who Knew?

Thank you for letting me share this with you.

This is wonderful! Congratulations, Joe.

Joel deserves anything that comes his way... a truly talented and passionate guy!