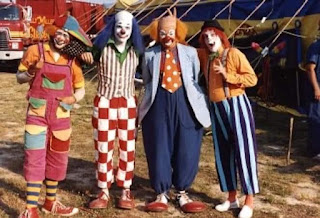 Francis and Dale were both recent graduates of Ringling’s Clown College from the Class of 1987. Ted graduated in 1971 and spent the 1972 season with Ringling’s Blue Unit. He clowned on many mud shows during his life, but I believe he spent the longest time on Kelly Miller.

I don’t know much about Joe, but would love to learn!