Toto Johnson and René Coker performing their laundry gag on Cirkus Olympia in Sweden during the 1990 season.
Toto and René performed a version of this gag as a Come In track gag on the Ringling Red Unit in 1989 before taking it to Sweden and making it an entrée.
The next year John Winslow, their Clown College classmate and Red Unit Alley-mate, joined them for the Olympia 1991 season.
Posted by Steve Copeland at 7/16/2022 05:20:00 PM No comments: 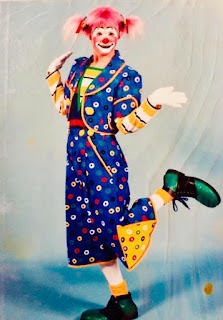 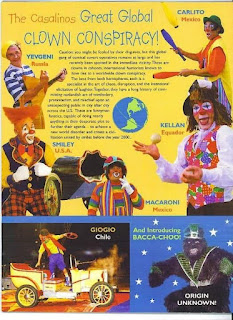 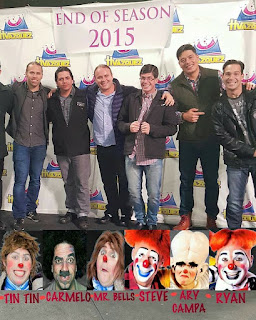 The clowns of the two Circo Hermanos Vazquez units at the 2015 end of the year party.

From the East Unit: Mr. Bells, Tin Tin, and Pancho the Martian

From the West Unit: Carmelo and Steve & Ryan

Mark Branner and Greg May (the camel) performing a gag during the graduation performance of the Ringling Clown College class of 1990.
Mark and Greg both received contracts to tour with the Red and Blue Units respectively. Both completed a year on tour and Greg later returned to the road on the Red Unit for 1994 and part of the 1995 season.
Posted by Steve Copeland at 7/13/2022 09:40:00 PM No comments: