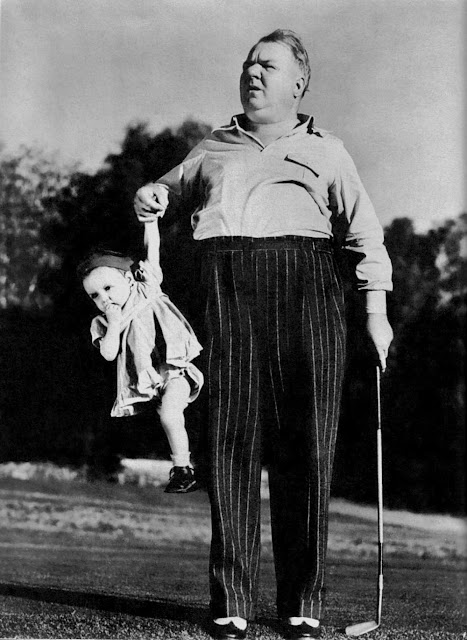 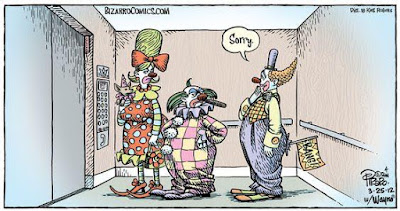 CHEERS OF A CLOWN

We go to the theater to be surprised, and for 40 years Bill Irwin has been on a steady quest to surprise us. Strangers rarely stop this chameleon-like artist on the street, because his own persona is so well disguised within his extraordinary gallery of characters. Irwin studied at the Ringling Bros. and Barnum & Bailey Clown College before turning to the stage. We often discover him wearing extremely baggy pants, black horn-rimmed glasses, and an item from his storehouse of bizarre hats on his head. His training and versatility gave him tools to enchant us in offerings ranging from Fool Moon and Old Hats, with his fellow clown David Shiner, to Waiting for Godot, with Steve Martin and Robin Williams, and King Lear, playing the Fool, a performance New York Times critic Ben Brantley described as “insolent, fearful, desolate and touched with the antic brilliance of madness.” Then he surprises us by turning up in The Good Wife, Christopher Nolan’s Interstellar, Rachel Getting Married, with Anne Hathaway, or as a serial killer on CSI. Or at the 1996 Atlanta Olympics as a drum major marching with a band that would not follow his directions.

Most recently I encountered Mr. Irwin at the Kennedy Center. On this night our surprise was to see him enter in one of his baggy-pants ensembles with a bow tie and derby hat, only to be joined by acclaimed ballerina Tiler Peck in a pas de deux that juxtaposed Ms. Peck’s balletic gifts with Irwin’s charm, humor, and considerable dancing skill. His bulky shoes seemed crafted to inhibit graceful movement, but he took on the qualities of the ballerina with his shape-changing eccentricity. It was a beguiling partnership.

Irwin has been a regular at the annual Kennedy Center Honors, performing onstage from time to time, but I rank him as our all-time most valuable audience member. We edited the Honors for television, and whenever we cut to Bill he was responding in perfect pitch, enhancing the viewer’s appreciation with the sensibility that works for him onstage, all natural, everything coming from inside.

In 2007, he gave me my favorite surprise. I went with a touch of skepticism to see him as George in Edward Albee’s Who’s Afraid of Virginia Woolf? Irwin’s clown took the night off. His seemingly mild, slightly stooped academic in a sweater-vest was so true to a college professor that his emerging rage and scarring wit were chilling and powerful when he tangled with Kathleen Turner’s boozy Martha. It is the best rendering of George I’ve ever seen, and it earned him a Tony Award for best actor.

Bill once said, “When you’re onstage, part of you wants to be off as fast as possible. And once you’re offstage, everything is in anticipation of the next time you’re on.” We’re waiting, Bill. 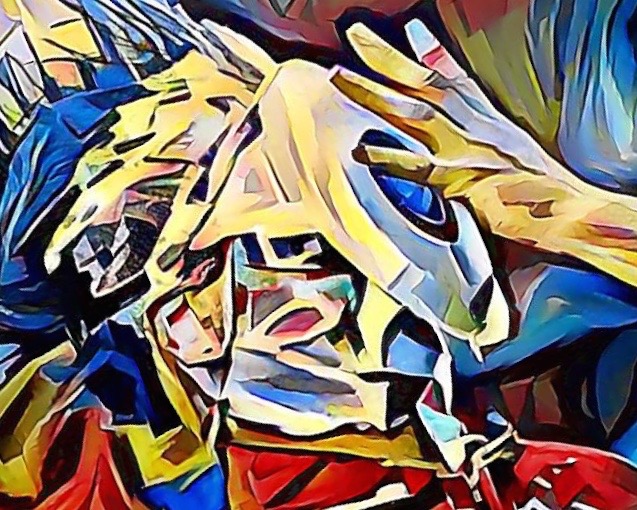 Courtesy of the National Fairgrounds Archives of the University of Sheffield 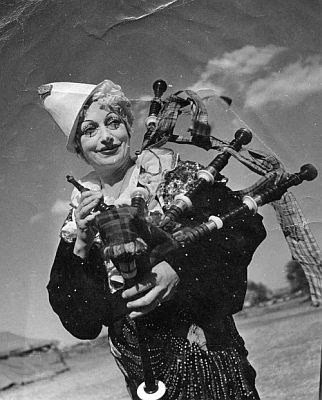 Lulu Adams was born Louise Cranston in 1900 to Joe Cranston and Martha Cashmore, while her parents were touring in Malines, Belgium. Lulu was born into a family with a long standing tradition in the circus, performance and variety business. Her grandmother was the first tightrope artist to perform at the Brighton Hippodrome. Her mother, Martha (born c.1870), was an acrobatic equestrian in her early career, changing her act later, to performing dog trainer. Her father Joe Cranston, was singled out by Lord George Sanger at the age of 9, to be made the central figure and youngest solo clown in his circus. Although Joe also performed as an acrobatic rider for some time he eventually devoted himself to clowning after numerous accidents convinced him that it was safer to keep both feet on the ground. Lulu’s uncle, Richard Durant, was also famed as a scenic designer for Drury Lane Theatre.


In her own words Lulu proudly stated:
‘I was born into the circus, mother was a rider and high wire performer. Dad was an acrobat and all sorts of things’…‘I shall go on clowning till I die’, She said to a reporter in 1950, ‘That’s the power of the circus, you can never leave it’.
Lulu made her debut in Russia age 12 with her sister Victoria, who was 2 years younger and from that time the duo became a popular musical act in the variety theatres of England and the Continent. Her aptitude for clowning developed early in life and she appeared many times with her father in clown entrees. Taking advice from her father in avoiding the grotesque in her make-up, she performed her musical burlesque routine wearing a curled white wig, white face grease and spangles.
Lulu was artistically talented as a designer and craft woman and musically talented on the clarinet, saxophone, cornet, drums, piano, violin and bagpipes, as well as an excellent singer, actress and dancer. She also spoke French, German and had a fair knowledge of 5 other languages.
Lulu became one of the earliest female clowns to appear in some of the most renowned British circuses of her time and the first woman clown to appear at Olympia. Lulu’s circus career took her all over the world, she worked with Barnum and Bailey’s in the U.S.A., Tom Arnold’s Christmas Circus at Harringay, Bertram Mills Circus and The Ringling Circus, to name but a few, before retiring in 1962.
When she was 17 Lulu appeared with her family in Glasgow in Hengler’s Circus. This is when she took a liking to bagpipes and convinced her father to buy her a set. Although best known for her bagpipes she often also appeared with a trumpet or sleigh bells. She toured continental music halls as a singer and her favourite number was ‘Laugh Clown Laugh’.
As far as Lulu could remember her life was one of continual work and practicing music, dancing, singing and acrobatics. For a period Lulu was part of ‘The Three Crastonians’, an Scotch musical act which was performed in traditional kilts by her and her two siblings Vicky and Joe. While travelling this act in 1927 Lulu met Albert Victor Adams, who soon after became her husband. Albert was a theatre manager and clown performer and Lulu decided to stop her career in variety to focus on a clowning double act with him, known as Albertino and Lulu. Sister Vicky and brother Joe continued with the family act but changed the name to ‘The Crastonians’, one of the highlights of their career was to appear in the Royal Variety Performance on November 9th at the London Coliseum in 1938.
Lulu and Albertino, appeared with Bertram Mills Circus, at The Blackpool Tower Circus and with Tom Arnold’s Mammoth Circus, amongst others. In 1939 they were in the United States where they hoped to spend the rest of their careers, but at the break of World War II, Albert who was in the reserves, had to return to the UK. Albert was an experienced soldier who served in the Great War as a Major. His military service in this instance ended when he was discharged on health grounds after being gassed by enemy forces. On their return to England, Albert was turned down for service, however this did not stop the couple from contributing to the war effort in the best way they knew. For a while Lulu worked as a nurse for the Red Cross, padding crutches and splints, while Albert went on a tour of military stations. Later Lulu and Albertino reformed their act and entertained the troops, as well as factory workers and evacuated children, while also appearing in a miniature circus in a small zoo in Chessington, Surrey.
Lulu and Albert were married for 20 years, until Albert died suddenly in America from heart failure while they were both broadcasting on a New York radio programme on 6 April 1948.
Lulu was a very creative and talented person and made her own costume designs, many of which were for the Windmill Theatre, just off Piccadilly. She also made dolls out of felt, scraps of fabric and odds and ends of jewellery, which she sold and made on commission. This hobby started during the war, when there was not much to give as presents. She also enjoyed painting and drawing and every year she would make her own Christmas cards, a sample of which we hold in the collection.
Lulu spent the last years of her life in Brighton with her sister Vicky running a bed and breakfast and selling art materials and dolls.
Posted by Pat Cashin at 1/25/2016 12:30:00 AM No comments: 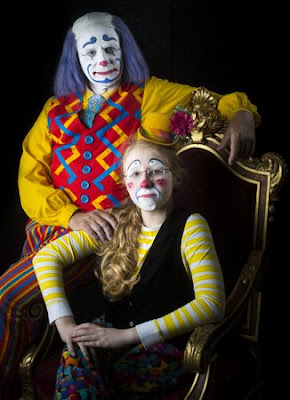