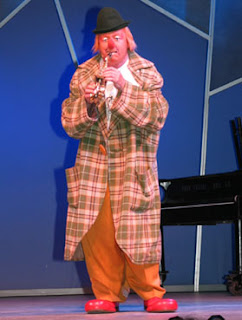 Word comes to us from our friend John Cooper that yesterday (February 4th) Chicky (Eugen Altenburger) passed away in Geneva, Switzerland. I have no further details as yet.

For seventy years the Rastellis have made audiences laugh on five continents, performing in Europe's most prestigious circuses ice shows and variety theaters.
Posted by Pat Cashin at 2/05/2013 12:30:00 AM 1 comment:

HOW YOUR BRAIN WORKS

This becomes interesting as an explanation of how so many teens and twenty somethings only know clowns as something that is supposed to be feared.

With fewer people attending live circus performances, and producers hiring fewer skilled clowns, the chances that someone has the first-hand experience of seeing a talented professional circus clown in actual performance is astronomically slim.