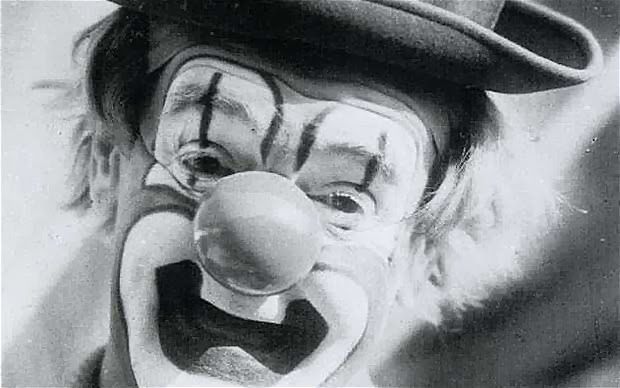 
His real name was Charles Wardell. Born in Leeds on April 10 1931, he was adopted as a baby by a travelling showman known as Newcastle Jack Taylor, a prize fighter who lugged his own boxing booth round traditional fairs in the north of England.

Young Charles left school as soon as he could to enlist in the Army and, from 1948 to 1953, served as a sergeant in the Green Howards in Suez, Malaya and Austria.

Returning to Britain, he began his career as a comedy act at working men’s clubs and as a children’s entertainer at Warner’s holiday camps, before a chance meeting with Ronnie Smart, son of the circus tycoon, led to his joining Billy Smart’s New World Circus as a clown in 1962. He took his circus name Spuggy from the nickname — “Spuggy-legs” (“spuggy” is Yorkshire slang for “sparrow”) — that had been bestowed on him by his mates in the Army.

He quickly became one of the circus’ most popular attractions, doubling as a hard-riding scout in Smart’s Wild West Spectacular, which closed every show.

After five years he left Smart’s and travelled to South Africa, where he joined the Doyle Brothers’ Olympic Circus. His departure from Britain took place amid some acrimony when, at the dockside, he was accosted by members of Billy Smart’s Circus management who prevented him from leaving with a valuable circus chimp he had adopted and nursed back to good health. Spuggy claimed that Billy Smart himself had given him the animal, and newspapers reported the “Tears of a Clown” as the police intervened to take the chimp off his hands.

In South Africa, Spuggy appeared in partnership with a dwarf clown called Tickey, but his success there was short lived: when one of the Doyle brothers died, the season was aborted after four months. He went on to tour the continent with a travelling exhibition featuring a huge 79ft preserved whale, and later with a performing dolphin show, before finding more sedentary employment as a hotel manager.

He eventually returned to England, and to Smart’s, where the chimp incident had been forgiven and forgotten, continuing to perform with the circus until 1971.

He then took himself off to Germany where, over the next 10 years, he appeared with some of the country’s best-known circuses, including the Althoff family circus. In 1978 he was chosen by the American Circus Ringling Brothers to appear at the International Circus Festival of Monaco, where he was presented with a gold medal by Prince Rainier.
Though he made his home in Germany, when his health declined Spuggy returned to England, finally retiring to Leeds, where he gave occasional performances in aid of children’s charities. Spuggy the Clown’s first marriage was dissolved. He is survived by his second wife, Deborah, and by Gillian, the daughter of his first marriage who married one of Germany’s leading animal trainers.