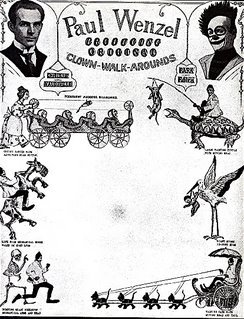 A recent eBay find, Paul Wenzel's early letterhead. We see several of his early century walkarounds as well as the Skeleton Chase No one seems sure of the creator of the this venerable old warhorse of circus comedy. Did Wenzel create it?

Interesting also is that Wenzel's makeup is different in the small walkaround pictures than it is depicted at the top of the page. The makeup at top looks to be inspired by Fred Stone's Scarecrow in the popular Broadway production of the WIZARD OF OZ.
Wenzel is also wearing slapshoes, which he isn't often seen wearing later in his career.