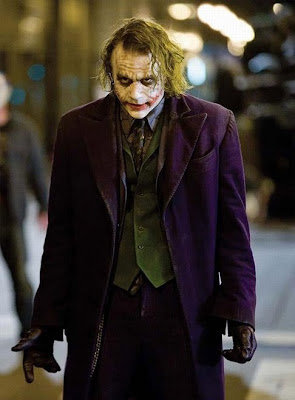 Believe the hype, folks... because it's all true.

I was born shortly before the Batman TV series entered it's third and final year on ABC. I grew up with it running in constant syndication on WPIX channel 11 from New York. I taught myself to read by reading Batman comic books and collected them religiously well past the age that I probably should have.

I had to live through two pretty interesting movies from Tim Burton and two awful movies from Joel Schumacher before finally getting Batman Begins from Christopher Nolan.

I've spent the last 40 years with these characters.

It's not just a "summer blockbuster". It's a really good film; Silence of the Lambs/Goodfellas/Godfather 2 kind of good.

I have to disagree about the scary clown image. The annual Jerry Bangs Halloween picture is a top contender.

My bad. I didn't realize that picture was from The Dark Knight... I thought it was a Blue Show clown.

I gotta agree with Greg on this one, Pat. Jerry's picture is just freaky beyond reason.....

I was going to Bring up Jerry Bangs...but I see others got to it before me.
"Toto"