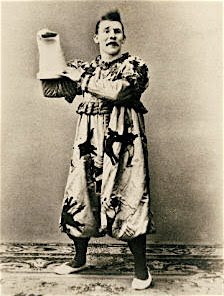 George Footit, a circus artist (white clown, rider and acrobat) and actor born in Manchester in 1864, deceased in Paris in 1921.

Son of George Footit and Sarah Crockett, both circus artists, he began its career at the age of twelve. He worked for Sangers' Circus of London, which came to France in 1880. In 1886, Footit teamed for the first time with Chocolat at Medrano. They then appeared with l' Hippodrome de le Champ de Mars, then with the Cirque Nouvelle de Paris.

During their long career, they perfected the comic duet between an authoritative white clown and an Auguste scapegoat. The expression “I am Chocolat” was popularized by the dialogue of their entrees.

Their career reached it's apogee in 1905 but they had separated by 1910 so that Footit might work with his sons. His career in the ring was never again to know the heights that it had reached with Chocolat.

Footit later launched his own circus, then owned a bar, in Montaigne in Paris.

George Footit is buried in Pere La Chaise cemetery in Paris, his grave being quite close to that of Oscar Wilde. Furthermore, his name appears on the list of celebrity graves that can be purchased at various point nearby. Celebrity indeed.
Towards the end of his career, it was claimed that he had spent so much time in France that he could no longer speak his native English! I have my doubts!