WHAT DO I WANT? 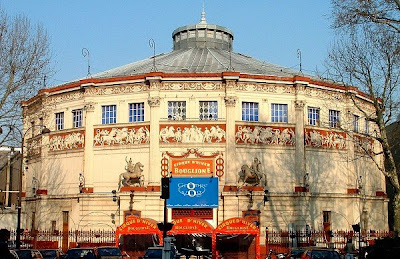 I'd like to see America build an honest-to-goodness circus building in New York City.

Not Madison Square Garden, not a tent in Damrosch Park or out on Coney Island but a real European-style home for the American circus; a building with no other purpose than to teach and present circus.

No hockey. No basketball. No rock concerts or ice shows. Circus. Only circus.

A place that Ringling could play in the spring and Big Apple could play in the fall. A place where New York could finally have it's own Shrine Circus in the winter. Something that could house a Clown College (were anyone so inclined to restart such a program) in the summer and host Cirque when they are in town.

A place that New York could invite the great circuses of Europe and introduce American audiences to a classical circus, devoid of the elephant rides, inflatable bounce houses and the 7 minute peanut pitches that keep American shows from trancending the carnivalesque.

Something that FINALLY says that we understand that the circus is an art form deserving of respect.

THAT is what I want.

Where should it be built? Right in Central Park

Can such a thing be done? Of course! Do it at night when no one is looking. 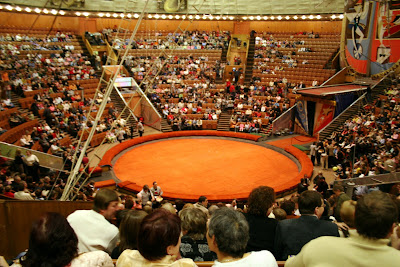 Great idea for a permanent building. But Central Park location? Not so much.

The last thing the city should do is take precious open spaces and develop them. And Central Park has become way too crowded already in recent years (as tourists have, unfortunately, caught on that it's not as dangerous as they'd thought).

Better to put the building on the West Side, where they were going to put that idiotic stadium.

The Central Park thing is a Marx Brothers joke from Animal Crackers.

Now, THAT'S a dream worth dreaming, and worth building into reality.
What a mission statement you suggest for such a project!
ehhh... Maybe not right in NYC (just my personal tic),
but not too far away, either.

But, it can be done.

I'll help lay bricks when nobody is looking. I blend in really well. Either that or nobody wants to look at me for too long...

For the benefit of those who don't realise, the outside shot is of Cirque d'Hiver Bouglione in Paris. The inside shot seems to be of the same venue.

The exterior is the Cirque d'Hiver Bouglione at 110 rue Amelot, at the juncture of the rue des Filles Calvaires and rue Amelot in Paris; the interior is the Moscow State Circus on Tsvetnoy Boulevard in Moscow.

I have the same dream for London. And that could serve as a clown training centre all year round.

Some years ago we performed in Arkhangelsk in Russia, outside an abandoned circus building.(The whole country if full them, as each major town had one built in former timmes, but many are now in disuse.) I made initial enguiries about using the place, but this would be a long project.

So count me in on any project like this, wherever it is in the world!

For photos of the Cirque Medrano and the Nouveau Cirque, check out this link: http://www.aloj.us.es/galba/monograficos/LAUTREC/Circo_Fernando.htm

I am fortunate enough to be able to work in one of this buildings, and yes, it is magical, I wish we had these type of buildings dedicated to the circus like we have in Europe. I am an American clown working overseas.