Lasseter builds empire out of past failures

You wouldn't know it by looking at Pixar's track record. Since "Toy Story's" debut as the first computer-animated feature in 1995, the Emeryville, Calif.-based studio has racked up four animated feature Oscars, multiple other prizes (including a Golden Lion at this year's Venice Film Fest for Lasseter and four of his directors for lifetime achievement) and more than $5 billion in worldwide box office. With this summer's "Up," Pixar achieves a perfect 10-for-10 winning streak -- a feat unheard of in Hollywood, where a 1-in-10 hit ratio keeps most companies in business. 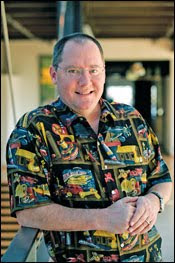 Talk to Lasseter and his team, and you'll get the usual platitudes about how Pixar is a filmmaker-led studio where story comes first -- principles the "Toy Story" director has carried over to Walt Disney Animation, where he has served as chief creative officer since the Mouse House bought its CG-savvy partner for $7.4 billion from Steve Jobs in 2006. But press a little harder, and Lasseter admits the mantra that sets the studio apart: "It's safe to fail."

The trick is to make those mistakes as quickly as possible and move on, a philosophy Lasseter picked up from colleague and computer science pioneer Ed Catmull (the man who lured him to Lucasfilm Computer Graphics Group after Lasseter lost his job at Disney in 1983 -- the setback that has paid off best in Lasseter's career).

"When you think about science, it's about experimentation, and 99% of the experiments fail, but you learn from the failures and you move on," Lasseter says. "That's the great thing about Ed. He's always wanting people to keep pushing, keep experimenting, keep trying, and we always learn and keep moving forward."

For all the technical advances that have impressed audiences about Pixar, Lasseter's greatest innovation has been to extend a principle of positive risk-taking to the creative process. Lasseter's approach applies at both studios, where he has introduced virtual safety nets to protect small failures from compromising an entire project.

He is adamant that teams not be allowed to sequester themselves or work too long without sharing their progress with others. No matter what state a project is in, every three months, directors are required to put their film up on reels and test how it screens. That way, Lasseter and his fellow leaders can identify problems early.

Lasseter doesn't believe in mandatory notes, introducing instead what he calls the "creative brain trust" at Pixar, a peer-support strategy in which all the directors and key story people from around the company get together and selflessly help on one another's films. "It doesn't matter whose idea it is, the best idea gets used," he explains.

"Animation is the most collaborative art form there is in the whole world," continues Lasseter, who says his goal at both Pixar and Disney Animation has been "to build a studio where everyone's working for the same thing, to make the best movie you can, and then to be open enough to let people put their two cents into it. The next thing you know, you're seeing stuff you would never have thought of yourself."

No shortage of bad ideas emerge, of course, but the environment is designed to be supportive enough that people feel encouraged to speak up and take creative chances.

"We fail a lot," admits "Toy Story 3" director Lee Unkrich. "We just don't fail by the time the movie comes out. John would be the first to tell you that every movie we've made has been at one point the biggest piece of garbage we've ever worked on."

Unkrich got his first co-helming credit (which at Pixar is like playing Robin to the lead director's Batman) supporting Lasseter on "Toy Story 2."

The project "wasn't working at all," he says, until Lasseter stepped in at the 11th hour, tore up what was there and rebuilt the story to resonate with audiences, pulling off what many at the studio consider Pixar's best film. (And that was hardly an isolated case. "Ratatouille" was repaired much the same way, with "Incredibles" director Brad Bird overhauling the project late in the game. Lasseter even allowed director Andrew Stanton to "reshoot" a couple scenes on "Wall-E" -- a costly fix rare in animation.)

"Back when we were first taking over 'Toy Story 2' and trying to fix it, I had a conversation with Steve Jobs expressing our concerns," Unkrich says. "He reassured me by telling me that when he looked back on his career, all the work he was most proud of was done under circumstances just like that, where it seemed impossible, where there wasn't enough time, there wasn't enough money, and everyone had set the bar really high for themselves."

Lasseter also looks to Jobs for advice, remembering an early meeting in which he went in to pitch his idea for the short film "Tin Toy." "He turned to me, and the only thing he said was, 'John, make it great.' And that's the mantra I've been living with ever since, just do everything we can to make it great," says Lasseter, who found confidence in Jobs' relatively hands-off approach to Pixar over the years, trusting the creative talent to steer the studio in the right direction.

After being named chief creative officer of Disney Animation, one of the first changes Lasseter put into effect was dismissing the suits and shifting the focus from an executive-led operation back to an artist-driven enterprise, where the ideas for feature films "come from the heart" of individual filmmakers.

"The one aspect of Pixar that we imported is our simple philosophy that a studio is not the building, a studio is its people, so each studio is going to have a different culture," he says.

At Burbank-based Walt Disney Animation, where Lasseter spends two to three days each week, the heritage of classic stories and hand-drawn animation runs deep, which is one reason Lasseter was so excited to bring back the 2-D tradition for December's "The Princess and the Frog" (directed by "The Little Mermaid" duo Ron Clements and John Musker, the latter being a classmate from his days at CalArts, where Lasseter also studied alongside Tim Burton and Brad Bird).

"I've always felt that the studio that should still be doing hand-drawn animation is the studio that started it all," says Lasseter, who until now has been guiding projects that were already in development through the Disney Animation pipeline (he tweaked "Meet the Robinsons" and restarted "Bolt," but "Princess" is the first one he built from the ground up).

"We couldn't be more proud of 'The Princess and the Frog' and the way it's coming together," says Walt Disney Studios chairman Dick Cook. Rather than simply replicating the Pixar model at Disney, "John and Ed Catmull are creating their own culture here, and they're allowing that culture to be developed by the artists at Disney."

Looking forward, Lasseter's Disney slate includes a mix of hand-drawn and computer-animated projects, and though both he and Cook are hopeful "Princess" will give them license to make more 2-D pics, they insist the fate of the format doesn't rely on the success or failure of that one film.

Lasseter is already planning other hand-drawn projects at Disney Animation. "Rapunzel," due out in 2010, will be CG, but the 2011 take on "Winnie the Pooh" could go either way.

"The thing I've prided myself in all the years of working at Pixar is picking the subject matters that really lend themselves to computer animation," says Lasseter, who directed toons about toys, bugs and cars himself. "Now, going to Disney, I get to think about what great subject matter lends itself to hand-drawn animation."

His new responsibilities leave Lasseter too busy to direct (one reason he tapped Unkrich to helm "Toy Story 3," a project rescued from a possible straight-to-DVD fate).

In his exec role, Lasseter can hardly ignore the business side, but creative concerns still take precedence -- and Cook has his back, stressing that the studio is once again making animation for the ages, not just opening weekend. Should "Princess" prove a frog at the box office, "Nothing's going to happen," Cook promises. "We will continue to look at all forms of animation, whether it be hand-drawn, computer or stop-motion."

Even if Pixar's incredible streak were to hit a speed bump down the road, the Disney honcho says he feels confident Lasseter's dedication to quality would carry them forward.

"I think every film is a giant risk," Cook continues. "Just take a look at the last few movies that have been giant successes for Pixar, from 'Ratatouille' to 'Wall-E' to 'Up' this year. Based on their face value, you would say those are going to be difficult sells, and yet all three of those have become huge worldwide events and successes. It comes back again to the quality of the movies. The movies prevail because the movies are great."
Posted by Pat Cashin at 8/27/2009 12:06:00 PM