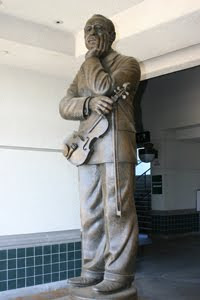 One of the catch-phrases of the radio show "The Jack Benny Program" involved a train announcer (Mel Blanc) who said over the loudspeaker, "Train now leaving on track five for Anaheim, Azusa, and Cuc... amonga," taking progressively longer pauses between "Cuc" and "amonga."

Part of the joke, for the Los Angeles audience, was that no such train route existed, although all three cities (or at the time, towns) do exist.

As a tribute to this 'publicity', the city of Rancho Cucamonga built its minor-league baseball stadium on a street they named Jack Benny Way, and erected a bronze statue of the TV host outside of the building's entrance.

The Jack Benny statue has since moved to the Victoria Gardens Cultural Center. (Coincidentally, Jack Benny Way intersects with Rochester Avenue, which is not named for the character portrayed by Eddie Anderson on "The Jack Benny Program", but was named in 1889 after the hometown of three investors, all of whom were brothers from Rochester, New York).
Posted by Pat Cashin at 2/05/2010 03:25:00 PM