To help alleviate some of the phone calls to the International Clown Hall of Fame inquiring as to the price of various displays seen on American Pickers the other night: NOTHING IS FOR SALE!!! 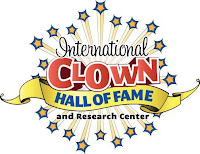 I think that we've said it in every conceivable way but still there seems to be a misunderstanding that everything seen in the episode has a sale price. It does NOT.
The items that were sold were part of the International Clown Hall of Fame's collection that has NOTHING to do with the Hall's stated mission of preserving and honoring the great clowns of the past. Often when someone donates a pair of shoes, a trunk or any other item of historical importance it comes to us along with several other pieces that have nothing to do with clowns or clowning. The Hall has acquired a sizable collection of things that have little or nothing to do with the ICHOF's mission. These things have not been discarded, ever, and take up a great amount of space and cost money to insure and store.
It is these items were made available to American Pickers as a way to raise awareness of the ICHOF's move to Baraboo, WI as well as to raise sorely needed funds for the Hall's continued operation.

The items that were sold were:

A carnival game
Some widely available reproduction circus posters (none with a clown image)
A toy elephant
The Dom DeLuise painting, the clown bike, the shoes and everything else featured in the segment are STILL on display at the Hall of Fame in Baraboo, WI. No clown items were ever for sale to the show and they are not for sale to anyone else. They are NOT for sale.
The ICHOF website will have a gift shop open soon with books, videos, t shirts and posters. These will be the only items that the International Clown Hall of Fame offers for sale to anyone. At any price.
If you are calling the Hall to purchase ANYTHING that you saw on TV the other night you can stop calling now.
Thank you ; )
Posted by Pat Cashin at 12/29/2010 01:31:00 PM

In my opinion, Greg and Karen are outright the most trusted stewards of our rich clown history. They deservedly represent all of what is good, right and true about our honorable profession. They are kind and passionate about their art, and are willing to provide education to a fellow clown like me so I can know the "true" story.
I loved the episode of "Pickers" and only wished we would have had a panoranmic view. I am a clown history "geek" of sorts.

I realize this will get me banned from future postings...but I just gotta say, "So by saying 'Nothing is for sale' I guess you mean that I can't buy those nice stand-ups or Frosty's sitdown? Darn! Okay,... in that case one of Papa Lou's early domes will do...you know something from the 40's to the 80's -anything in that period. Even if it is a little sweaty."

By the way Pat, thank you for this great blog. Although I am hooked on classics, your blog keeps the art fresh and out front.

Here's wishing you and your family a splendid New Year!

Dang.. I sure would like to buy Cookie's tie that Mike Wolfe touched!!! oh well.