INTERNATIONAL CLOWN HALL OF FAME ON "AMERICAN PICKERS" TONIGHT ON THE HISTORY CHANNEL!!! 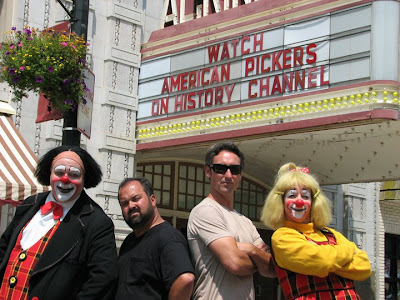 Baraboo's clown museum, and unique objects from its storerooms, will be featured on national television at 8 p.m. Monday.
The local flavor will be part of the newest episode of the popular antiques and artifacts show "American Pickers," televised on the History Channel - Channel 44 for those receiving Charter cable television.
Monday's "American Pickers" episode will feature an "amazing miniature automated carnival" from the International Clown Hall of Fame and Research Center, according to a press release from the History Channel's Heather DiRubba.
"American Pickers" follows hosts Mike Wolfe and Frank Fritz as they travel the country rummaging through attics, basements and junk piles looking for unique and unusual objects.
The episode stems from a June visit by Wolfe, Fritz and their television crew to Baraboo.
Greg DeSanto, a Baraboo clown and executive director of the museum, said the Hall of Fame was one of the highlights of the hosts' visit.
The TV hosts interviewed DeSanto, his wife and fellow clown Karen DeSanto, while looking over the exhibits and rummaging through the museum's storerooms of artifacts.
"They were looking for unique and interesting places and they found one here in Baraboo," DeSanto said. "They really thought a clown museum would be an interesting dig for them."
Exploring the Hall of Fame and searching for an artifact in Baraboo was fairly easy and comfortable for the show hosts, he added.
"They're used to climbing under theater stages and dusty, musty barns," DeSanto said. "They're archeologists of interesting objects."
In each episode, the pickers also explore small towns and introduce viewers to "quirky characters" they find during their search for interesting objects.
DeSanto said he and Karen dressed in clown make-up and costume while leading Wolfe and Fritz around the museum and conducting their interviews.
He expects that after being featured on a popular national show, the Hall of Fame and Baraboo will gain some attention, resulting in an increase in appeal for tourists.
"That's what's so great about having a national program that's so highly rated and seen by so many people," DeSanto said. "Not only will (the audience) get to see some fun stuff they got to pick, you'll get a sense of the International Clown Hall of Fame and Research Center (and) you'll get a sense of the town of Baraboo. Really, they fell in love with this little town and this circus lineage that goes with it."
The Clown Hall of Fame is a non-profit, tax-exempt organization, and as such DeSanto said they were not free to sell off objects directly connected to their mission of preserving the history of clowning. However, he said, the museum has collected interesting and historic objects over the years that are not directly connected to clowning.
"People, when they donate a collection, they give us everything," he said. "Some things in the collection are not clown-related; they might be circus-related or carnival-related."
It was from among those items that Wolfe and Fritz picked a variety of things to buy, including the miniature carnival that will be featured Monday evening.
"We took them through our basement, our storage, our museum, our backrooms," DeSanto said. "They were fascinated by this stuff that is really different from anything they've encountered on a farm or in some storage locker."
Information about Baraboo's International Clown Hall of Fame can be found online at www.theclownmuseum.com, while the "American Pickers" website, including video of episodes, can be found at www.history.com/shows/american-pickers.