CAIRO – Egypt's Hosni Mubarak resigned as president and handed control to the military on Friday, bowing down after a historic 18-day wave of pro-democracy demonstrations by hundreds of thousands.
A massive crowd in Cairo's central Tahrir Square exploded into joy, waving Egyptian flags, and car horns and celebratory shots in the air were heard around the city of 18 million in joy after Vice President Omar Suleiman made the announcement on national TV just after nightfall.
"In these grave circumstances that the country is passing through, President Hosni Mubarak has decided to leave his position as president of the republic," a grim-looking Suleiman said. "He has mandated the Armed Forces Supreme Council to run the state. God is our protector and succor."
Nobel Peace laureate Mohammed ElBaradei, whose young suporters were among the organizers of the protest movement, told The Associated Press, "This is the greatest day of my life."
"The country has been liberated after decades of repression," he said adding that he expects a "beautiful" transition of power. 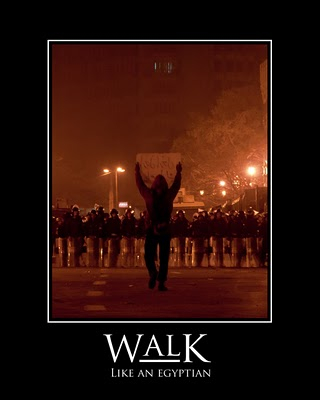 Email ThisBlogThis!Share to TwitterShare to FacebookShare to Pinterest
Labels: News

Well, ain't this ironic; I've been glued to the news following this story for a day and a half, and I finally
get the word of his resignation from a clown blog! Given the way of the world, that somehow feels appropriate!