My son Shane and I had a wonderful evening last night at the Big Apple Circus during it's final weekend in Lincoln Center. We ran into some old friends, met some new ones and had a mini-Clown College reunion as Barry Lubin and Joel Jeske were appearing in a show directed by Steve Smith (not in attendance) and my CC roommate for the summer of '97 Ambrose Martos was working the VIP area of the reception tent. 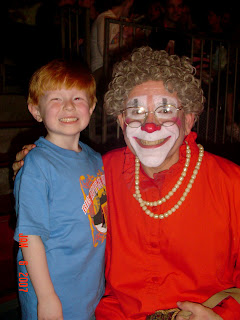 Shane went absolutely nuts when Grandma made her entrance last night, hooting, cheering and waving his Grandma doll over his head. He spent the first 15 minutes or so asking the same question that I did when I first saw this year's show, "Where's Grandma?" It's worth the wait. 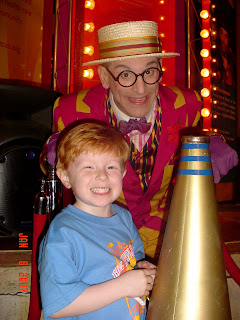 Shane with host/announcer Joel Jeske. Joel met up with us after for a trip to the diner. Shane was not exactly on his best behavior but he IS only four, was just coming back from a circus and was full of soda, popcorn and cotton candy. Not the best combination if you'd like your kid to sit still and finish his chicken nuggets while the grown-ups talk.

Here's a 10 minute video I found on YouTube featuring highlights from this year's show. It doesn't contain much of the clown material, which is probably all for the best...they really need to be seen live! Great work from Barry Lubin, Joel Jeske, Francesco, Johnny Peers and Justin Case under the direction of Steve Smith.

Barry doesn't look a day older than when I worked with him in 75. It is just amazing! I did notice that he has chosen the "light" perm these days. Good move.

Shane and Barry could do a great puppet gag. Is Shane's wig yak hair?

That video doesn't do the show justice. It was the best BAC show I've seen. The dog act was also the best I've ever seen. And of course, Grandma was a highlight, as always.

BTW, do you make Shane dye his hair to match your clown wig?? He's a cutie.