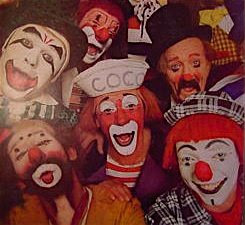 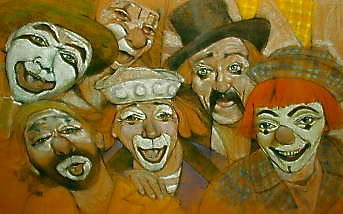 Members of the Ringling Alley of 1965 in watercolor from a photo used on the cover of The Saturday Evening Post April 10, 1965.
Top row: Prince Paul Alpert, Billy Ward
Bottom Row: Mark Anthony, Michael "Coco" Polakov, Freddie Freeman and some guy from concessions.
Coco told me that this photo was taken right after a show and that's why Prince's skullcap in askew and Coco isn't wearing his nose. The photographer asked the clowns to pose after they had stared getting changed. The ones in the photo are the guys who hadn't started taking their makeup off yet. They hastily arranged themselves, posed, and then went back to getting changed.
They did it so quickly Coco didn't realize he'd already taken his putty nose off.
They were all quite surprised when the photo was selected to be on the cover of a national magazine