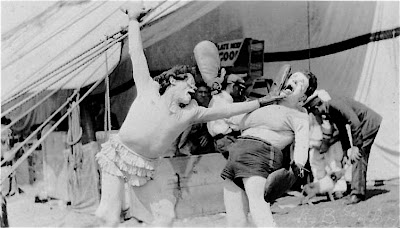 Chesty Mortimer and a whiteface partner performing the boxing gag in an undated photo. I'm going to guess that this is from the late 20s/early 30s. I have footage of Lou Jacobs performing the gag on Ringling in the 30s, probably just about the same time that Otto Griebling and Freddie Freeman were establishing their version on the Cole Bros. Circus.
Posted by Pat Cashin at 4/16/2010 12:15:00 PM

Email ThisBlogThis!Share to TwitterShare to FacebookShare to Pinterest
Labels: Photo