SAVE THE VENICE CIRCUS ARENA!!! 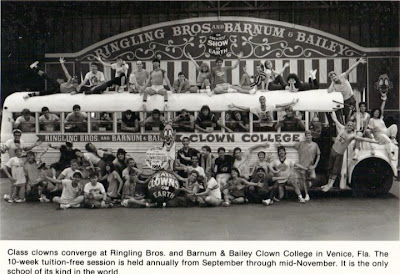 Tino Gaona has halted the wrecking ball and may really have the momentum going this time to actually restore and re-open the circus arena in Venice, FL. This is the arena where Ringling had its Winter Quarters from 1960-1992 and Clown College was held there annually from it's inception in 1968 until the arena was closed in 1992.

Click the title of this post! Join the Facebook group! Support the project!
I, for one, would like to see the International Clown Hall of Fame run an 8 to 10 week training program there each summer ;0)
Posted by Pat Cashin at 4/02/2010 07:39:00 AM

Wouldn't it be cool if RBBB did an 8-10 week training program there?
OH! The best of the program could get contracts!