Welcome Back, Pee-wee. You Were Sorely Missed! 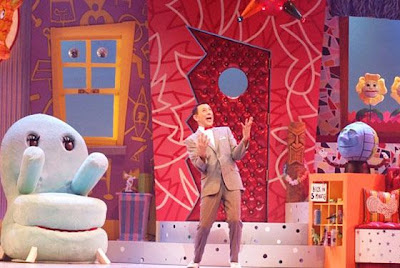 Upon entering the temple, we’re greeted with the alluring aroma of fresh plastic. Whatever’s behind that curtain smells like 1985, and it’s intoxicating: We’re here for a tent revival, and maybe a little time-travel. A fallen martyr of our youth is about to retake the stage, his glory restored, his strangled giggle un-gagged, his patent-leather hair undamaged. Sure, he’s a bit wider in the middle, and the cherry-red bow tie fits a little tighter now, but the point is, he’s here, against all odds, despite years of persecution. “I know you are,” speaketh Pee-wee Herman, paraphrasing Christ’s reply to Pilate, “but what am I?”
Amen! The Pee-wee Herman Show is a candy land parade of familiar faces, memes of Christmas Past, and play-along-at-home sketches: Jambi the Genie grants a wish! Pterri the Pterodactyl flies in for a visit! Conky the Robot spits out “the secret word”! Lick it, and you’ll uncover coat after coat of sweet meta-ness, with one great, governing joke at its chewy-center: Pee-wee Herman (comedian Paul Reubens) is a child in a grownup’s body--and now, that grownup is All Grown Up.
The children of the Reagan-era took Reubens’ act (the cackle, the catchphrases, the dance) at face value when they tuned in to watch Pee-wee’s Playhouse, that knowing yet ever-earnest gloss on fifties kid-shows. Parents, meanwhile, could appreciate the subversion peeking beneath the undercarriage--they might have even seen Pee-wee’s bawdier LA stage show and HBO special. (Cynical types were all too delighted when he was busted for indecent exposure in a Sarasota adult-movie theater, an incident that flash-froze Reubens’s career in 1991 and changed how we hear the word “Chairy” forever.) But today, this comedian’s reunion with his compulsively nostalgic target demo produces an effect that’s nothing short of uncanny: Pee-wee was designed as a throwback, a cornball tribute to Howdy Doody and Captain Kangaroo; now he’s a throwback of a throwback, and the focus is on the absurdity, nay, the impossibility of currency itself. “Pee-wee, nobody’s being modern anymore,” argues the know-it-all iPad forerunner Magic Screen, who’s threatened by Pee-wee’s sudden interest in a home computer. “Modern is antiquated.” Pee-wee responds by hissing a contemptuous string of vacuous slang: “No worries. Same difference. It’s all good.” Reubens always was a covert educator, of a sort, and he’s still at it: A retired fad lecturing his kids on the hazards of faddishness and the fierce emptiness of Now. It’s kinda like Spuds MacKenzie running an AA chapter: A little bit postmodern, a lot-bit ridiculous, and plenty of cracked fun either way.
Best not to overthink it: You’re not going to Pee-wee for a wistful seminar in the disposability of popular culture. You’re here for the foil ball, the Penny cartoon, for Cowboy Curtis (Phil Lamarr, taking over for Laurence Fishburne) and Miss Yvonne (still played by Lynne Stewart). Well, they’re all here, and more besides. From the moment the light hits that Skittles-hued set, you know you’re either with Pee-wee or indifferent to him, a condition largely governed by age, attitude, and blood-sugar level. Is Pee-wee still “the luckiest boy in the world”? Or just a pop anomaly come round again, like some kandy korn comet, for another pass? Does it matter? Chillax. Pull up a Chairy. It’s all good.
At the Stephen Sondheim Theatre through January 2.