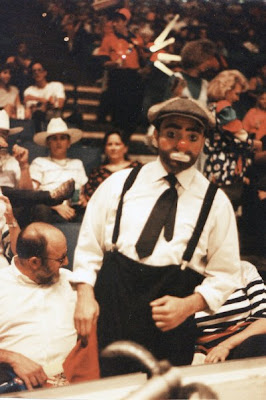 Theodore ‘Teddy’ A. Ferlo
Theodore "Teddy" A. Ferlo Nov. 18, 2010 Theodore "Teddy" A. Ferlo, age 47, of Rome, passed away November 18, 2010, at St. Joseph’s Hospital, Syracuse, with his loving family at his side. He was born March 15, 1963, in Rome, a son of John T. and Dorothy Francescone Ferlo, and graduated from RFA and Mountain Vie...w Community College in Dallas, Texas. He formerly was a professional clown with Ringling Bros., Barnum and Bailey Circus, and currently is employed as the Special Events Manager at Turning Stone Casino and Resort. Teddy was united in marriage to the former Mary Beth Combs, whom he met while performing with the Circus, on March 16, 1991, in Rome. He was a member of St. Peter’s Church.
Ted was a loving husband, father, son, brother and uncle; he adored family. Ted’s greatest passion was performing, which now lives on in his boys. He was an excellent teacher; the three of them loved putting on a show wherever and whenever they could.
Ted will be greatly missed by friends and family all over the world. Each and every person meant so much to him.
Ted is survived by his wife, Mary Beth; his mother, Dorothy; two sons, Sebastian and Samuel; three sisters and brothers-in-law, Frances and Richard Galluppi of Rome, Deborah and Glenn Hand of Rome, and Dorothea and Paul Iselo of Floyd; a brother and sister-in-law, T. Robert and Nancy Ferlo of Clifton Park; a sister-in-law, Diane Ferlo, of Menifee, CA; a special friend, Mike Colangelo; and several nieces and nephews. He was predeceased by his father, John T. Ferlo, a brother, John "Skip" Ferlo and a nephew, Christopher Ferlo.
Funeral services will be held Monday at 1:00 p.m. from the Barry Funeral Home, 807 W. Chestnut Street, and at 2:00 p.m. at St. Peter’s Church. Burial will be in St. Peter’s Cemetery. Relatives and friends may call at the funeral home Sunday 2 to 6 p.m.
Memorial contributions may be made to a Scholarship Fund being established for Ted’s sons, Sebastian and Samuel, c/o Dorothea Iselo, 8394 E. Floyd Road, Holland Patent, NY 13354.
Ted was a wonderful person, a great clown and an exemplary father.
He will be very sorely missed.
Posted by Pat Cashin at 11/18/2010 03:33:00 PM

Ted was an extraordinary man and a genuinely great person. His witty sense of humor, kinds ways and smile will be missed at the Turning Stone. I am honored to have known Ted. Rest in peace Mr. Ferlo. Your time here was short but you have left an impression in all our hearts.