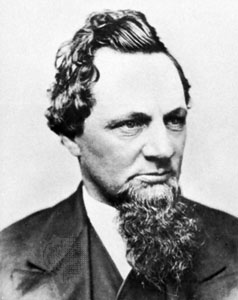 Dan Rice, original name Daniel Mclaren (born Jan. 25, 1823, New York City—died Feb. 22, 1900, Long Branch, N.J., U.S.), American clown who was one of the most highly acclaimed clowns in the history of the circus. Rice was renowned for an act that included singing, dancing, witty badinage with the audience, feats of strength, trick riding, and exhibitions of trained wild animals.
He was a jockey as a boy and started his circus career at 17, when he bought a half interest in a trained pig. Next he was a strong man, and in 1844 he made his debut as a clown. A star of the one-ring circus, Rice achieved national prominence as an equestrian jester. By the 1860s he was at the height of his career, commanding the then-phenomenal salary of ,000 a week. He toured the United States with his own one-horse show and with other circuses and was recognized everywhere by the Uncle Sam beard that was his trademark. President Zachary Taylor made Rice an honorary colonel; in 1868 he put himself forward for the Republican nomination for the presidency. Rice began walking out on contracts, and in 1885 he made his last tour.
Posted by Pat Cashin at 1/23/2016 09:49:00 PM

It's great that you're commemorating Dan Rice's birthday. To contribute, I offer a bit of correction and addition:
- He was probably, but not conclusively, named Daniel McLaren at birth.
- His act did not include trick riding, but his circus did.
- He probably started his performing career with a trained pig, but not in a circus.
- He made his debut as a clown in 1843, in a circus in Pittsburgh.
- All circuses in the mid-19th century were one-ring circuses.
- Stories said he pulled in $1,000 a week.
- His "One-Horse Show" was publicity spin, putting a good face on the fact that most of his circus one year got foreclosed and about all he had left was one horse.
- Zachary Taylor did NOT make him an honorary colonel; that was a fiction Rice created later.
- His campaign for president came in 1867, leading up to the 1868 contest.
- Rice was on a circus in 1884-1885; made a lecture tour of Texas in 1885-1886, when he married the Cattle Queen of Lavaca County; moved back east in 1887, and made scattered appearances on shows the next few years; had a benefit at NYC's Union Square Theater in 1890; ; and took out another circus in 1891, before a blowdown around New York ended his circus career.