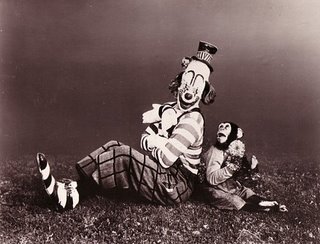 Peluza, a clown on the Shrine circuit in the 1950s who modeled his makeup and costume after Jimmy Stewart's character,Buttons, in the film THE GREATEST SHOW ON EARTH. I know, strange choice because most professional clowns agree that Stewart's makeup was the nadir of effective clown makeup design and his character, as noble as his motives may have been, is arrested for the murder of his wife at the end of the film.

But the image was used heavily to promote a wildly successful film that did win an Oscar for Best Picture, so I can see why someone might try to capitalize on that.

I'd like to know more about Peluza. I'm pretty sure he's still living in Las Vegas. He seems to be in every Shrine circus program during the 50's and 60's. I know he did teach one year at the Ringling Clown College in the mid 70's.

Peluza's real name was Javier Esparza, and as far as I know he is still living in Las Vegas.
A few years ago he was the victim of a hit & run and was severly injured, it ended his career, & left him in pretty bad physical shape. As I said he was in my opinion very funny, one of his walk arounds was a sailor carrying a mermaid, another was in drag /w skin tight dress and twirling beads around his neck.
He did a come in with large 5, or 10 gallon square tin cans, doing a fall over the ring curb that made a racket bringing all attention his way.
Off stage he had a very quick wit & was fun to be around.

Javier Esparza Peluza is a friend. I work as a Security Officer at Arizona Charlies casino in Las Vegas. Javier comes in for a little recreational gambling every few weeks or so. He is a very nice gentleman. He gave me one of his old business cards this week & I came across this site while Googling to find out a bit more about him. I do not know the details of any accident, but he now walks with the use of a cane. He is a very nice man & it has been interesting learning a bit more about him. Thanks!