Fabulous Freak Brothers (and One Sister) 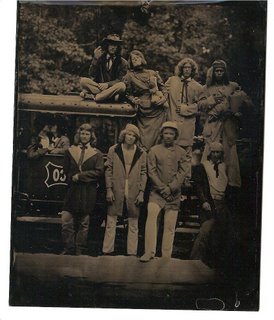 Ron Jarvis sent this photo, which at first glance looked to me like a 1968 Moby Grape album cover, but which he assures me is a photo of the 1973 Red Unit Clown Alley of the Ringling show. It looks as though it was taken on the night they were all busy driving ol' Dixie down. Where was the First of May party that year? Gettysburg?

He then challenged me to name as many of the clowns out of makeup as I could.

I got two. By process of elimination that must be Peggy Williams in the center.

And there is no hiding the fact that that COULDN'T be anyone but Billy Baker down in the right hand corner.

As for the rest of them, they look like roadies for Blue Oyster Cult. GET A HAIRCUT!

It's obvious that Irvin Feld and Bill Ballantine hadn't thought to include "Long-haired freaky people need not apply" to the early Clown College applications.

Is that Zapata in the top right corner?

This tin-type, old time photo was taken in the summer of 1973 at Silver Dollar City, Missouri theme park in the Ozarks. I had worked there several summers, developing a love of entertaining while going through college, on my way to Clown College. We were on our way to Tulsa, from Memphis, and had pulled an all-nighter to stop by and see the park. The park was extremely nice to us when we arrived, and made sure we had a good time. We had too good of a time, and they were glad to see the circus leave at the end of the day.

It was a great day, a great trip and now, great memories. You shoulda been there.
billyb

What I wouldn't give for just one more 'Wella Balsom' shower...

I recognized that old steam engine from Silver Dollar City right away. I worked there for a few summers after Clown College in the late 80's robbing trains and then returned for a couple of seasons about 5 years ago. Lots of good memories there. Useless trivia: that engine was the original train used in the park when it opened in the 50's. It's still sitting near the train depot...being used as a flower pot!

Where is Henry Schroer now?

"Where was the First of May party that year? Gettysburg?"

FYI The party started the first day of rehearsal and ended for me personally 3 years later...

"As for the rest of them, they look like roadies for Blue Oyster Cult. GET A HAIRCUT!"

No, we actually look more like roadies for 'Dan Rice's One Horse Show'...

"It's obvious that Irvin Feld and Bill Ballantine hadn't thought to include "Long-haired freaky people need not apply" to the early Clown College applications."

Dude, buy a clue, this is what we all looked like in 73. Even Tim Holtz had sideburns (kind of.)

Yes Irvin and Bill liked longhair kids as clowns. Tough guys then, not junior punkers or anything like that. We had been through a minor recent Jeffersonian revolution and took being "hippie yippee" seriously.
Ringling helped many talented clowns to avoid the draft. Dont know what they would say about that now, but they got them out one way or another. Don't knock long hair. kiddy clowns today don't even wear wigs. And there is no clown alley on Ringling to speak of.