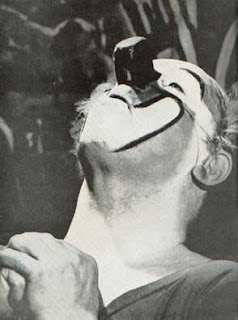 Charlie Rivel, who I just learned that John Ringling North attempted to bring to the States several times to tour with the Ringling circus and who's Chaplin impersonation on the trapeze North considered "the greatest clown act I ever saw."

How differently American circus clowning might have developed had Rivel come to America.

Then again, he might have just as easily been swallowed up by the massive Ringling organization (like Marceline was) and spit out a few seasons later, a shadow of his former self.

Better to consider the former...