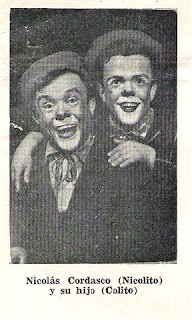 Nicolita, left, was named Nicolas Cordasco (1912 - 1993); with his son, Nicolas Roberto Cordasco (1944- late '90s) were a rarity, a clown team formed by two little people. They were very popular in Argentina, in circus and TV, and they were billed as "The Gold Midgets" (that word is not considered offensive down there..).

Both father and son were married to tall women, and both were quite the ladies men... I met Coli in person a few times. Nicolita started his circus career in Buenos Aires, he was a heck of an acrobat, and guess who was his first partner and teacher back in the early '20s?. Well, another famous clown from Argentina, Alfredo Landon...